Johnny Zest (né Landgraab) is a pre-made Sim who resides in Oasis Springs from The Sims 4. According to his family bio, he is a member of the Landgraab family, but was disowned from dropping out of school to follow the career of being an entertainer.

Johnny is a young adult, 24 days away from becoming an adult. He works in the entertainer career at level 2 (open mic seeker). He has two skill points in comedy and has the Joke Star aspiration. He has no relationships at the beginning of the game and his family does not remember nor recognize him as part of the family, which could be believed to be from him being disowned.

Johnny lives on his own in Slipshod Mesquite, a trailer home and begins with §3,950. 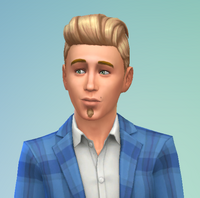 His wardrobe by default.
Add an image to this gallery
Retrieved from "https://sims.fandom.com/wiki/Johnny_Zest?oldid=940708"
Community content is available under CC-BY-SA unless otherwise noted.