John Gray is a pre-made alien Sim from The Sims 2 for console. He lives at Andromeda Arms in Pleasantview with Mary Gray. Despite Mary's bio calling John her husband, they are not married in-game. The player can easily get them married since they're already lovers. He is the only Sim with Gold Wants, but it won't unlock a new location. His last name is most likely a reference to the "Greys", a name given to alleged extraterrestrial beings. Even though John has the appearance of abs, in Debug Mode CAS his body type is 0, which means he is supposed to be thin. 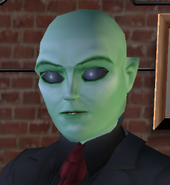 In-Game Icon
Add an image to this gallery

Retrieved from "https://sims.fandom.com/wiki/John_Gray?oldid=923164"
Community content is available under CC-BY-SA unless otherwise noted.