John Burb (previously known as Johnny Burb in The Sims: Unleashed) is a pre-created playable Sim in The Sims: Unleashed, The Sims 2, and Dragon Valley, a world from The Sims 3 Store. In The Sims 2, he lives with his wife Jennifer and daughter Lucy. He holds the unusual distinction of being one of only two pre-created characters whose first name changes, albeit slightly, between two installments in the series (the other is Robert "Bob" Newbie Sr.).

In The Sims: Unleashed, 'Johnny' (whose given name is John) represents the All-American boy of the 1950s. His parents, Brad and Tiffany, are completely different from one another. He is a child, dressed in a red shirt and blue overalls with a blue cap. He loves frogs and playing in the mud. His least favorite subject in school is history. He thinks that his dog, Tucker, is the greatest dog in the world. He lives at 63 Gunther Goth Highway. His personality is remarkably different from that in later games.

John and Jennifer appear as young adults in Dragon Valley. At this point, they are not married yet, and said to set sail before their wedding day, and ended up in Dragon Valley. John and Jennifer's time in Dragon Valley takes place before the birth of Lucy and before the death of Tiffany. However, none of his family members, nor Jennifer's make an appearance in Dragon Valley, though his brother-in-law Daniel and his wife Mary-Sue appear in Sunlit Tides, coincidentally also appearing as a young couple on vacation. He looks quite similar to how he did in The Sims 2, however his hair is slightly different, he wears an open red shirt over a white t-shirt and he has stubble instead of being clean-shaven.

In The Sims 2, John Burb has dropped his childhood nickname, has met and married Jennifer Burb (née Pleasant), and has a child, Lucy Burb. His parents, Brad and Tiffany Burb are already deceased. He "misses the time he spent in his parents' garden, and wants to carry on the tradition." (weeding, watering plants, etc.) He wears a black jacket over a brown shirt, and khaki pants and he has neat brown hair. When first played, he will want to play with Lucy, have a baby, and see Lucy get an A+.

The Burb family are found in the family bin, so they will have to be moved onto a lot. When the family is first moved onto a lot, he will be 21 days away from becoming an elder, and will have three points of Charisma and one point of Logic. Being a Family Sim, he is also very fond of children, and the "have a baby" want will come up often. He has a better relationship with his daughter Lucy than his wife does, and would probably be happy being a stay-at-home Dad. He is close to becoming fat.

His facial structure is identical to that of the 2nd face template in Create a Sim, except the forehead which sticks out more. John's personality has differed significantly from his original appearance in Unleashed. This could simply be an error on the developer's part, or to show that his personality had matured over time. This happens with several child Sims re-appearing in The Sims 2. 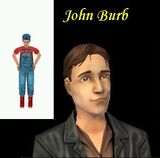