The Sims Wiki
Register
Don't have an account?
Sign In
Advertisement
in: Sims, Female Sims, Elders,
and 37 more
English

Jocasta Bachelor is one of the pre-created Sims featured in The Sims 2 and The Sims 3.

Though deceased when The Sims 2 begins, she can be seen in the relationship trees of playable Sims Cassandra Goth and Alexander Goth, who are her grandchildren. She resided, during her lifetime, in the Sunset Valley neighborhood that ships with The Sims 3. She is the mother of Bella and Michael Bachelor.

In The Sims 3, Jocasta Bachelor is an adult living with her husband, Simis, teenage son, Michael, and younger daughter, Bella in Sunset Valley. She works as a Book Store Clerk. Jocasta's main priority is keeping her family happy, but her other hobbies include gardening, fishing, and sometimes cooking, though she doesn't have a lot of time to enjoy them. Her lifetime wish is to have the Perfect Garden.

Jocasta's personality traits in The Sims 3 are over-emotional, loner, green thumb, coward, and angler. The "loner" trait seems to be chosen incorrectly because Jocasta's aspiration is Popularity and she is even outgoing in The Sims 2. However, it is possible that Jocasta outgrew the "loner" trait and became more of an outgoing and popular person. Other traits are completely unique. She grows her own garden in the backyard, which is the biggest garden in Sunset Valley. Despite her biography in The Sims 3 stating that she loves the arts, she doesn't have the Artistic trait nor any painting skill.

By the time the storyline has caught to The Sims 2, Jocasta Bachelor is already deceased, as is her husband, Simis Bachelor. Her son, Michael Bachelor, died of old age after marrying Dina Caliente. This leaves Jocasta's daughter, Bella Goth and her grandchildren, Cassandra and Alexander Goth as her only living descendants. Jocasta died in the elder stage, hinting that she could've died of old age, however her grave is nowhere to be found. For that reason, her cause of death is unknown, as she has no ghost, and it's impossible to resurrect her in normal circumstances. Since Cassandra Goth has no memories of both Simis and Jocasta's deaths, it is possible that they died around the time she was born. That would (retroactively) explain why they did not appear in The Sims. According to her SimDNA in SimPE, her hair was blonde before it grayed.

Though her character data was deleted, regenerating her with SimPE is a tad easier than most dead ancestors, as her facial features are exactly like one of the pre-made faces (except for slightly customized eyes), unlike most unresurrectable Sims. According to SimPE, Jocasta had 25 days left when she died.

Jocasta talking with her daughter Bella in the background.

Jocasta arguing with another woman (who appears to be Claire Ursine or Molly French) while Mortimer and Bella are playing.

Jocasta and Simis Bachelor in the Pleasant Rest Graveyard. 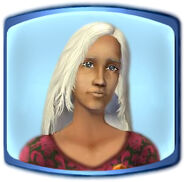 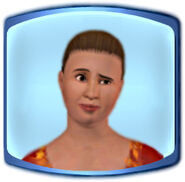 Jocasta's wardrobe. Notice how her formal outfit resembles Bella's trademark red dress, which could possibly suggest that Bella got it from her. 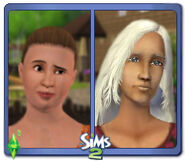