"Sometimes I gotta take people down. They race against me.. they kiss the pavement. Kiss the ring baby."

Jet Rockit is an Urb residing in Urbzville's district, Gasoline Row. He is a street racer who likes to customize bikes, which are stated to be just beyond legal limits. During the opening sequence in the console version he appears to be somewhat antagonistic, but in the game the protagonist is given a mission to mug Jet by Luke Laruffle's request.

In comix the "Outlaw Angst" by Peter Bagge, Pork Chop is telling one of his infamous stories to Jet, who is clearly annoyed by it, as he tries to grill sausages. He picks up on Pork Chop's lies about his 'war times', and also becomes annoyed when he eats all the sausages, that a newbie, Jayde, has made.

When Jayde is confronted by an agitated Sharkey Spitz, Jayde "Body Slams" her, which Jet finds to be awesome. He is even more impressed when Jayde soups up a bike. 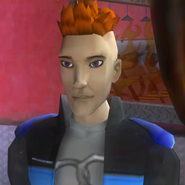 Add an image to this gallery
Retrieved from "https://sims.fandom.com/wiki/Jet_Rockit?oldid=875274"
Community content is available under CC-BY-SA unless otherwise noted.