Jess Sigworth is a pre-made Sim who resides in StrangerVille, the world introduced in The Sims 4: StrangerVille. She lives with her husband Dylan Sigworth and daughter Christie Sigworth.

Jess is a young adult, around 23-20 days away from becoming an adult. She works in the military career at level 3 (lacking corporal) and has the Successful Lineage aspiration. She has five skill points in fitness and three points in both charisma and handiness. She is infected when she is first played.

According to her family biography, Jess had to move in to StrangerVille with the rest of her family due to her having to transfer to the StrangerVille National Base. However, after Jess had spent a few days in the base, she had become infected. It was first noticed by her husband Dylan, with her daughter Christie also slowly realizing what's going on.

Jess is featured in the official trailer for StrangerVille, first showing how she got Possessed. However, in the trailer Jess is shown to be living alone in Slip 42, instead of her actual home at Riverside Grove, with the rest of her family nowhere to be seen. Jess is later seen in the trailer as cured, exploring the mystery with her supposed friends Alice Martin and Erwin Pries, with later fighting an unknown enemy in a suspicious laboratory. Even though the trailer shows Jess to be friends with Alice and Erwin, they don't have any relationships at the start of the game. 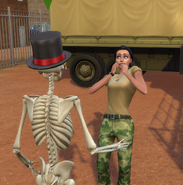 Possessed Jess scared of a skeleton.
Add an image to this gallery
Retrieved from "https://sims.fandom.com/wiki/Jess_Sigworth?oldid=898304"
Community content is available under CC-BY-SA unless otherwise noted.