Jennifer Burb (née Pleasant) is the daughter of Jeff Pleasant and Diane Pleasant. She is the younger sister of the pre-made Sim Daniel Pleasant, and the sister-in-law of Mary-Sue Pleasant. Jennifer is the granddaughter of Marshall and Melinda Danders and Les and Kynda Pleasant. She is also the wife of John Burb, the mother of Lucy Burb, and the paternal aunt of Angela and Lilith Pleasant.

In The Sims, she starts out as a child in the Pleasant family located in the family bin. She is accompanied by her parents, Jeff and Diane Pleasant, and her brother Daniel Pleasant. She has black hair in a ponytail, and wears a green and blue sports T-shirt with white shorts and matching trainers. She dreams of being a soccer superstar, which is why she is rather described as being a bit tomboyish.

While all children in The Sims are the same age, The Sims 2 establishes that she is much younger than Daniel, intending that Daniel was a teen, and Jennifer was a child. She has the same personality as her brother.

A different version of Jennifer appeared in Japanese copies of the game, with slightly different facial features, as well as wearing the same clothes as Cassandra Goth. If Expansion Packs are installed before the Pleasant family is first played, this version of Jennifer will start with an A+ instead of a B.

Jennifer and John return in the Dragon Valley premium world for The Sims 3 as young adults who are engaged but are not yet married. To explain their presence in a fantasy-themed world, their bio reveals that they decided to sail around the world as a "last hurrah" before settling down and starting a family, but somehow got lost and found themselves in Dragon Valley. It is implied that they are enjoying their adventure but still hope to return home in time for their set wedding date—presumably to explain why they are back in Pleasantview by the time The Sims 2 takes place. The Sims 3 is the only game in which Jennifer doesn't start in the family bin. Jennifer looks very similar to how she would appear in The Sims 2, although her hair appears straighter, and she wears different clothing.

In The Sims 2, Jennifer is far more feminine. She has dropped her dreams of being a soccer superstar and takes great interest in fashion and clothing design. She wears a tan tanktop with a matching skirt and black pumps. Jennifer is married to John Burb, and has one child, Lucy Burb. Her parents, Jeff and Diane Pleasant are deceased at the start of the game, having died when Jennifer was pregnant with Lucy. Her brother, Daniel Pleasant, is married to Mary-Sue Pleasant, and had twin daughters: Angela and Lilith Pleasant which makes Jennifer their aunt. As an adult, Jennifer seems to look much more like her mother than her father. She has the same personality as Ajay Loner.

When the family is first moved onto a lot, she will be 25 days away from becoming an elder, and will have two points of creativity and four points of body skill. Her husband is 4 Sim days older than her. John has a better relationship with Lucy than Jennifer, but not by much. Both are just short of the friendship level with Lucy. She has a memory of going steady with John as a teenager, whereas he does not. When first played, she will want to get a job, buy expensive things, and earn money, as her aspiration is Fortune. Jennifer has a hidden Family aspiration token.

Jennifer's age makes no sense when compared to Lucy's age. Lucy should be a baby or on her first day of toddlerhood, but instead she is nearly halfway through childhood. The reason for this is because they were created in Create-a-Sim, though an in-universe explanation could be that Jennifer had access to the Elixir of Life sometime after Lucy's birth. John's age seems to fit in better with Lucy's age. In The Sims she had Sagittarius as her zodiac sign, but in The Sims 2 her sign is mismatched as a Gemini and should be an Aries. 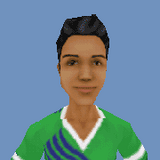