Jennail Tricou was the wife of Kvornan Tricou and mother of Fricorith Tricou. She is deceased at the game's beginning, but during her lifetime she inhabited the House of Fallen Trees. She was buried at the Gothier Green Lawns and is buried on the opposite side of the cemetery from her husband, Kvornan, where her spirit still haunts the grounds. If you resurrect her, she will not get along with her brother-in-law, although her husband will have fairly good chemistry with her sister.

Jennail is notable for being one of pre-made Sims in The Sims 2 to have an outfit that comes with tattoos. Interestingly, she had personality points and memories, something not every pre-made deceased Sim has. Her ghost appears pale blue and checks the fridge often, indicating she died of starvation. According to her memories, Jennail appears to have been the last family member to die. 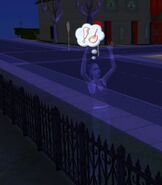 Add an image to this gallery
Retrieved from "https://sims.fandom.com/wiki/Jennail_Tricou?oldid=905439"
Community content is available under CC-BY-SA unless otherwise noted.