Jebediah S. Jerky is a Sim from The Sims 2 for Nintendo DS. At the start of the game, he agrees to fix the player's car if they run the hotel. He is frequently found in an angry mood, but is relatively easy to calm down. In the GBA version of the game, he owns a dairy farm and the player can play a mini-game where they clean up cowpat. At the end of the game, he is usually seen in a sad mood. 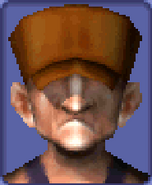 Add an image to this gallery
Retrieved from "https://sims.fandom.com/wiki/Jebediah_S._Jerky?oldid=852060"
Community content is available under CC-BY-SA unless otherwise noted.