Jason Greenman (né O'Mackey) is the older brother of Gabe O'Mackey, uncle to Jules O'Mackey, and husband of plantSim Rose Greenman. Because of his marriage, he has gained Daisy Greenman, the daughter of Rose and ideal plantsim, as a stepchild. He has a locked high-scoring want to join his wife as a plantSim at the beginning of the game. It appears that Jason and Gabe discovered Rose, as well as an entire community of plantSims in the mountains. Reflecting his wife and stepdaughter's life state, most of the Greenman house is a greenhouse. He is 21 days away from becoming an elder when first played. Jason is voiced by David Boat.

His lifetime want is to reach his golden anniversary, which is a lifetime want that is generally limited to Family Sims. This LTW discrepancy is due to Jason having a hidden Family aspiration token. There are other pre-made Sims with hidden tokens of different aspirations, including the Cordial sisters, Carlos Contender, Jessica Peterson, Circe Beaker and Olive Specter.

All the memories of Jason's life have the green positive background, including those that shouldn't be, such as his parents' deaths. This happens with all pre-made playable Sims from Riverblossom Hills.

Jason's face is a slightly modified version of a pre-made face from Create a Sim. The face is in the bin for adult males with light skin (skin tone 1), and has a blond mop top and glasses. This CAS face, if used on toddlers or children, has a shrunken chin and plump face.

Chester Gieke, Gabe O'Mackey, and Trent Traveller also use slightly modified versions of this CAS face. There are other versions of this face which can be found in the bins for child, teenage, and elder males with light skin, and young adult males with tanned skin. Blair Buckingham uses the elder version of this face with no further customizations.

Jason upon fulfilling his want of becoming a PlantSim. 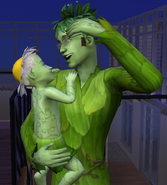 PlantSim Jason with a PlantBaby of his own.
Français Русский
Community content is available under CC-BY-SA unless otherwise noted.
Advertisement