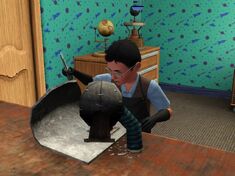 Not to be confused with Invention Constructor.

Inventing is a skill that appears in the Ambitions expansion pack for The Sims 3.

This skill benefits from the Eccentric trait. As an inventor, Sims can create either brilliant or destructive gadgets. There is a new junkyard lot where inventors can collect scrap using detonation packs. Inventive Sims can provide scrap as a medium for Sims developing their sculpting skill. There is a new inventions log that lists all the inventions a Sim has created and the travels they had in the time machine. Inventing will also increase Sim's handiness skill. Players can register as a self-employed inventor if they have at least a skill level in inventing.

Inventor Sims use the Scraptronic™ Workbench to build inventions. While inventing on the workbench, there is a chance that a Sim might accidentally electrocute themselves or cause an explosion that sets them on fire. In addition to working at the Scraptronic™ Workbench, Sims can also raise inventing skill by reading books and detonating objects. Before being able to create an invention at will, a Sim must use the Invent interaction and accidentally stumble upon making the object first. After that, they can reproduce the object at will so long as they have the required amount of scrap metal.

Children can become inventors as well, although the option to use Detonation Packs will not be available to them until they become young adults.[1]

Widget Wonder
A Widget Wonder has created 250 Widgets. As a result, all Widgets the Sim makes will be Improved Widgets and will have a bonus value. Widget creation time is shortened as well.

Methods for obtaining a SimBotEdit

The Great Invention Convention
Goal: Visit Stadium
Reward: Increase in inventing skill and new blueprint
Text: Scientists and Inventors from all the world are flocking to <Stadium> for The Great Invention Convention. This convention features robots and vehicles to astound the mind and boggle the senses. <Sim> should go and check this out -- maybe there's something to be learned?

Description: <Book Store> just did a big renovation to the "Do It Yourself" section and there is quite the heap of trash and construction material lying around. Because everyone knows that <Sim> loves to dabble the Scrap, they were hoping <Sim> would be willing to do the cleanup in exchange for some scrap.

Retrieved from "https://sims.fandom.com/wiki/Inventing?oldid=895572"
Community content is available under CC-BY-SA unless otherwise noted.