Imogen Pelly is a pre-made Sim living in Appaloosa Plains. She works in Spa Specialist part-time job at level 1 as a Clothes Folder albeit with a relatively poor job performance metric. In her inventory, she carries a High School Diploma, a XS 4258p Laptop, and two books, "A Wall Between Us" and the "Warlock of Palladia". She resides in the Cliffside Haven.

Imogen is a woman whose pressured upbringing as a young television star has lead to her becoming short-tempered and earning a damaged personality. She lives in the country at the start of the game to escape a public relations disaster involving a surgery gone wrong, and seems to be waiting for the smoke to blow over as well as taking some time away from all the pressure she has been under.

She lives with her pink poodle, Pantoufle, who she dislikes. She is pregnant with the child of her ex-boyfriend, Booker Singleton. Imogen's romantic interest is Kanoa Parrott, and she dislikes Hetty Lionheart . She starts the game with the athletic skill mastered, and 7 points in writing. 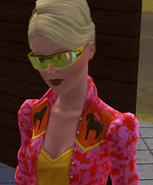 Add an image to this gallery
Retrieved from "https://sims.fandom.com/wiki/Imogen_Pelly?oldid=830327"
Community content is available under CC-BY-SA unless otherwise noted.