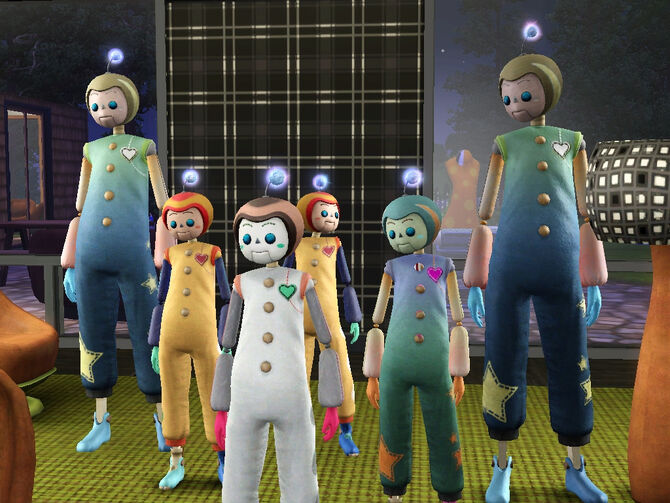 Not to be confused with Invisible Friend.

An Imaginary Friend is a life state in The Sims 3: Generations. An Imaginary Friend begins its life as a magical doll that a newborn baby or a toddler may receive in the mail from a distant relative. Under the right conditions, the doll can come to life after its owner grows into a child.

Imaginary Friends will go through up to three different forms throughout their lifespan, starting out as toys and potentially ending their lives as beings similar to regular Sims. In its initial form, an Imaginary Friend serves as an inanimate soft toy for a baby or toddler, much like a Wugglesworth Schnuggles Bear. During this stage, the Imaginary Friend can occasionally be seen teleporting around its home lot and changing poses if left outside a Sim's inventory, much like Mysterious Mr. Gnome. If a birthday party is thrown for its owner, the Imaginary Friend will usually automatically appear alongside the rest of the household as they watch the owner age up. Imaginary Friends in this form come in a variety of patterns, with either spots, stars, or stripes. There are twelve possible patterns in total.

All Imaginary Friends will begin with randomly-generated names. Players may rename the toy at any time during this stage, and in the process determine its future gender should it be turned real by specifying whether the new name is a male or female one. If the original name is left unchanged and the Imaginary Friend is later made real, its gender will be random.

When the owner of an Imaginary Friend leaves their home lot, goes to sleep or asks to be left alone, the Imaginary Friend will revert to its original toy form until the owner returns to the lot or attempts to interact with it again. Socializing with the Imaginary Friend in either of these forms raises the Social motive in the same way with ordinary Sims. In addition, the second form may be asked to fetch food or help them with chores. The player cannot directly control the Imaginary Friend at this stage, with only the Sim that owns it being able to influence its behavior by giving it commands.

From the child stage onwards, the Imaginary Friend may be converted into a real (if slightly inhuman-looking) Sim via the use of the Imaginary Friend Metamorphum potion. This third and final form can be seen and interacted with by all Sims, functions as a playable member of the household rather than an uncontrollable NPC and will always start out as the same life stage as its owner. By default, Imaginary Friends turned real will wear unusual clothing based on the colours and patterns of their first two forms, though they may later be given the same clothes as regular Sims if the player so desires.[1] Furthermore, Imaginary Friends turned real will frequently have abnormal hair and eye colors, which may be passed on to any children they later produce.

There is a 75% chance that a package containing an Imaginary Friend doll will be delivered to an existing household soon after a new baby is born. The doll will immediately appear in the baby's inventory when another Sim goes to the mailbox to collect it. A baby may only receive one doll at most. If you create a toddler in CAS , it can also appear , but it has a smaller chance of getting the Imaginary Friend doll in their inventory after making it with a 50% chance.

Getting rid of the doll[]

If the player does not want a Sim to have an Imaginary Friend, but received one anyway, simply prevent its owner from forming a bond with it as a toddler by placing it in the inventory of another household member or cancelling any autonomous attempts to interact with it. Without a strong bond with its owner, the Imaginary Friend will remain an inanimate object. The Imaginary Friend doll cannot be sold in Build or Buy mode without mods, but can still be given away as a present to another child. As of patch 1.24, Imaginary Friends can no longer be permanently buried in a sandbox and will eventually return if this is attempted. If Ambitions is installed, it is also not possible to detonate the Imaginary Friend doll. If Supernatural is installed, the doll can be transmuted into gold or stored in the Aleister’s Antique Alchemy Cabinet.

The Imaginary Friend doll can be deleted by using testingcheatsenabled, shift-clicking the doll, and choosing the "Delete It" option.

For the most part, Imaginary Friends turned real function in a similar manner to regular Sims in gameplay terms, being able to go to school or join careers and professions (depending on their life stage) and unable to see other Imaginary Friends that have yet to become real. They can, however, switch back to their second human-sized ragdoll form at will, and always have the option of using the Imaginary Friend walk animation in addition to the standard Sim walk. They may also autonomously teleport to different locations on rare occasions, particularly if they get trapped. In addition, if an Imaginary Friend has only recently become real, they will gain positive moodlets for performing certain ordinary actions for the first time in their lives.

As they are still considered a non-human life state by the game, Imaginary Friends turned real will still cause a Celebrity to be publicly disgraced if they engage in WooHoo with them,[TS3:LN] and cannot be bitten by Vampires or Werewolves.[TS3:SN] Despite this, however, it is still possible for Imaginary Friends to interbreed with other life states and produce hybrid offspring.

If World Adventures is installed and the Sims travel abroad before making any imaginary friends real, the original doll may "break" and Sims cannot interact with it.

A child having a pillow fight with her Imaginary Friend.

An Imaginary Friend that has been transformed into a real Sim. Note the clothing and green hair.

An Imaginary Friend turned into a ghost via the Ghost Potion.

A vampire toddler "playing" with his Imaginary Friend.