The Ichtaca family is a pre-created, yet playable family featured in Isla Paradiso, from The Sims 3: Island Paradise. The family consists of the late Adalia Ichtaca, her two sons Guillermo and Rubisel, Guillermo's wife Carolina, and their two children Liliana and Everado.

According to their family description, they are descendants of the ancient island royalty and live in a large home, save for Rubisel, who lives in a houseboat. Rubisel also has a crush with Linda Scott who is also pregnant with his infant, Unborn baby Scott.

Originally Carolina was listed as the biological mother of Liliana and Everado, but after a patch following the release of Island Paradise, she no longer is listed as such. This is also the case for Rosemarie Collins, Persephone Han, Linda Scott and Lopita Alto.

The Ichtaca family (particularly Guillermo and Carolina) is mentioned in one of the object descriptions from The Sims 4: Movie Hangout Stuff. 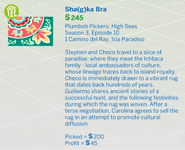 The object description in which the Ichtaca family is mentioned.
Add an image to this gallery
Retrieved from "https://sims.fandom.com/wiki/Ichtaca_family?oldid=826536"
Community content is available under CC-BY-SA unless otherwise noted.