Hunger is one of the basic needs of a Sim. Not fulfilling this need can result in death. Hunger also has a strong effect on job and school performance. A Sim who goes to work or school hungry will not do well.

For obvious reasons, a Sim cannot survive for very long without food. As long as a refrigerator is available, a Sim can have a snack, a frozen heat-and-eat meal[1], or a regular meal. A Sim can also serve a group meal (which is the same as a regular meal except one Sim prepares several servings). The Sims 2 and The Sims 3 added several cold foods, such as cereal, sandwiches, ice cream, and instant meals-in-a-can.

If a Sim is lacking a refrigerator for whatever reason, or is unable to cook, he or she can also phone for a pizza. However, eating a pizza is not nearly as fulfilling as cooking a meal, and it can take quite a while for it to arrive. Also, a pizza is more expensive than a group meal, costing §30-40. In The Sims, an adult Sim without a refrigerator can also satisfy hunger on his or her home lot by cooking food on a barbecue.

How well a meal fills the Hunger meter depends on several factors. In The Sims, it mostly depends on the Sim's cooking skill, but is also affected by the quality of the refrigerator. In other games, with more types of food available, it primarily depends on the type of food. In all games, if a stove or oven was used, it will be affected by the quality of that appliance. It can also be affected by the quality and cleanness of the preparation surface, and the use of a food processor. (In The Sims, a food processor will automatically be used if present and accessible. In later games, if a food processor is present, it will automatically be used for foods that require chopping.) In The Sims 2 and The Sims 3, some types of food may be more satisfying if the Sim preparing them has a higher level of Cooking skill than is needed to be able to make them.

Eating away from home

In The Sims 2 and The Sims 3, Sims may get fed while they are at work or school if their hunger motive is low enough.

Neglecting the hunger need will give a hungry Sim the "hungry" moodlet for three hours. After that, it will be replaced with "very hungry", which will last for one day. If the Sim still hasn't eaten by the time that moodlet expires, he or she will finally get the "starving" moodlet. If that moodlet expires, the hungry Sim will die of starvation. Toddlers have the second two moodlets for 12 hours and babies have "Very Hungry" and "Starving" for a mere 8 hours.

Sims can also buy the "Hardly Hungry" lifetime reward for 25,000 lifetime points. This will cut the decay rate of hunger to ¼ of usual.

At least in The Sims and The Sims 2, one issue players face is making sure that Sims have time to eat. Normally in these games, Sims eat at a set pace, and will not eat faster even if they are at risk of missing the carpool or school bus - or of falling asleep while they eat. The Sims 3 compensates for that by having Sims take out quick meals from the refrigerator or eating a harvestable rather than a full meal.

While PlantSims[TS2:S] have no true equivalent of Hunger, their Water motive has some elements of Hunger, in that a PlantSim will die if the motive is depleted. Also, some things which fulfill Hunger in normal Sims, such as drinking juice or a toddler drinking from a bottle, will fill this need.

For SimBots[TS3:A], the equivalent of Hunger is Scrap Reserves. SimBots can fill this need by eating scrap, which is what they prefer, or by eating Sim food. However, unlike other life states, SimBots never die when their Scrap Reserves are depleted. Instead, they will short out, and can be repaired by Sims with high Handiness skill.

For Vampires in The Sims 3: Late Night, the equivalent of Hunger is "Thirst". This motive is filled by drinking Plasma, the Sim-equivalent of blood. They can get plasma by draining Sims, from Plasma Fruit, which is a new plant, or by snacking on Plasmapacks.[2] Similar to death by starvation, Vampires can die by thirst. The ghost of a Vampire who dies in this way is red, with a pulsing red light beating where the heart would be. The image on the tombstone is that of a bat and the stone itself has a slight red tinge. 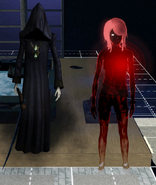 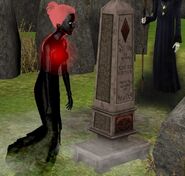 Retrieved from "https://sims.fandom.com/wiki/Hunger?oldid=564154"
Community content is available under CC-BY-SA unless otherwise noted.