The Sims Wiki
Register
Don't have an account?
Sign In
Advertisement
in: Sims, Male Sims, Mummies,
and 6 more

Horus Menhoset IX is a character in The Sims 2 for Nintendo DS and Game Boy Advance.

Horus Menhoset IX appears in game when the player is on Ava Cadavra's task to find a pyramid in the desert. The player needs to recover his sarcophagus from the desert near the oasis (using a metal detector), and follow his instructions to brand the Bovine Shrine, effectively destroying it. After the Shrine has been branded, it is replaced with the statue of an Egyptian god. Gourds need to be given to the statue every few days (or regularly if given one at a time), or else Horus will enter a state of trance where he cannot move or interact with anyone. People around him will also be in a trance.

His secret is that he has established a profitable online gift-wrapping service.

In this version of the game he is just called "The Mummy". He has his own pyramid that is called "The Ziggurat" which is infested by TseTse flies. He is very lonely and steals items from people to see if those things make him more happy. He stole a medal from Luthor Bigbucks and a teddy bear from Bigfoot. He even kidnaps Penelope Redd and is somewhat hard to intimidate, which must be done twice during the course of the game. Once in "There Was This Mummy" in order to enter the ziggurat and another time in "Triassic Trouble" just to get an Egyptian Burial Vase and give it to Ava Cadabra. 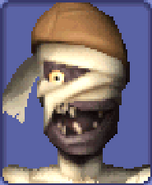 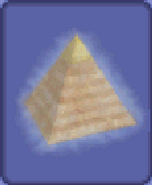