Holly Alto is the daughter of Nick and Vita Alto, and lives in Sunset Valley with her parents. With the Good trait, Holly is the exact opposite of her parents, and she and they are barely acquaintances. She is good friends with Bebe Hart. Although acquainted with the Landgraab Family, she is the only Alto who is not enemies with any of its members.

Some people assume she is Ginia Kat, and changed her name because she was ashamed of her parents.Although others believe she is Mom Landgraab. 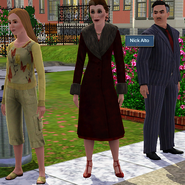 Retrieved from "https://sims.fandom.com/wiki/Holly_Alto_(Sunset_Valley)?oldid=114728"
Community content is available under CC-BY-SA unless otherwise noted.