The Sims Wiki
Register
Don't have an account?
Sign In
Advertisement
in: Sims, Female Sims, Teens,
and 19 more
English

For other Sims with this name, see Holly Alto.

Holly Alto is a pre-made Sim appearing in The Sims 3. She is the daughter of Nick and Vita, and the niece of Bert from Hidden Springs. She may be a spoof of Meadow Soprano from The Sopranos.

Holly lives in Sunset Valley with her parents. Being a Sim with the good trait, Holly is the exact opposite of her parents, and she is barely acquaintances with them. She is good friends with Bebe Hart. Although she is only acquainted with the Landgraab family, she is the only Alto who is not enemies with any of its members.

At the start of the game, Holly is four days away from becoming a young adult and is a B student in high school. She starts out with one skill point in logic and two skill points in painting, and her inventory contains 5 apples and the satire Exit at Powell.

Oddly, Holly doesn't appear to have any of her parents' genetics, the most obvious difference being that she has light brown hair with blonde highlights, while both her parents have dark hair. She also has the good trait while her parents have mean spirited and evil traits. Because only her parents are shown in the family tree, she may have inherited her hair color from an earlier generation or dyed it. Some players believe that Holly is adopted, but if Holly has a child, it can have some of her parents genetics, which implies she most likely got her genetics from an earlier generation. 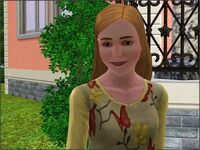 Holly Alto outside her house. 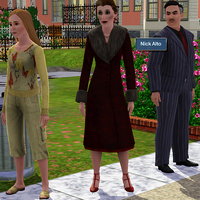 Holly and her family. 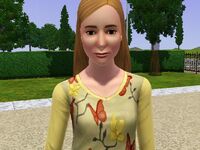