The Sims Wiki
Register
Don't have an account?
Sign In
Advertisement
in: Traits, The Sims 3, The Sims 4
English 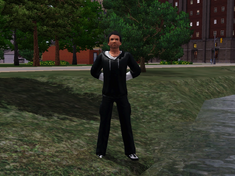 A Sim with can salute hidden trait.

Hidden traits are traits in The Sims 3 and The Sims 4 that cannot be seen in-game except when a Sim performs a related action autonomously or an unlocked interaction is available.

Hidden traits become available to Sims in specific careers, life states, or in some cases the children of a Sim with the hidden trait.

These traits are hidden but otherwise function similar to the standard traits. These hidden traits are often found in NPCs and Sims who reach certain career levels. Sims with these traits have a 50% chance to pass them onto their offspring.

These traits are assigned to Sims by the game for technical purposes and are not supposed to represent proper traits. Many of these hidden traits do not feature icons.

The Sims 4 features some hidden traits that are never visible. Many of them are used only for technical purposes, such as marking visited secret lots, completed first time actions, or to provide functionality for NPCs. Hidden traits function similarly to regular traits, and typically only life state traits can be inherited.

Occult Sims will have these traits, though they can only be viewed when editing an occult in CAS and setting club membership requirements. However, PlantSims, Servos and skeletons cannot be chosen as club requirements, and they have no special icon in CAS. There are no in-game descriptions.

NPCs with completely unique traits, such as Bonehilda, are immortal and will not age or die. If they are somehow removed from the game using cheats or mods, an exact copy will be generated to take their place. Other NPCs will be replaced with new Sims if they give up their NPC role, which can be caused by moving them into a playable household, marrying them, or killing them.