The Sims Wiki
Register
Don't have an account?
Sign In
Advertisement
in: Worlds in The Sims 3, Official downloads, Hidden Springs
English 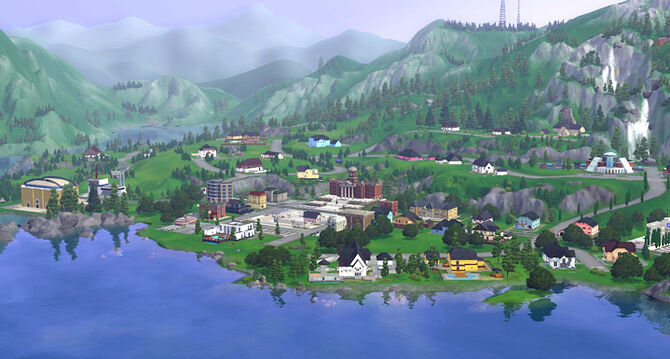 Hidden Springs is a downloadable world available in The Sims 3 Store as the third world that The Sims 3 Store has released. It was announced on August 4, 2011 and released on August 25, 2011.[1][2][3][4] This world is set in an alpine, mountainous environment. Sims can go to the Crystal Solarium Rejuvenating Waters and the Zephyr Health Spa or the Museum of Magic and Supernatural.[5]

Celebrities and the rich flock to Hidden Springs in search of relaxation and escape from the mundane. Many cannot resist rumors of the seemingly miraculous healing powers that linger in the woods and waters. Some of the townsfolk who live in the woods are highly secretive and seem to have a pale green tinge to them. Is it really magic at work?

All-New Gameplay Object The Fountain of Youth is available exclusively with Hidden Springs and allows you to expand your game with all-new gameplay benefits. Will your Sims choose to become forever young?

Our princess has gone missing and we need your help! She probably snuck out again at night in search of that fabled Fountain of Youth. Apparently, it’ll make you younger, but I say it’s complete nonsense. I keep telling her these fairy tales don’t exist, yet she just won’t listen to me!

Worse yet, my son Sebastian has been obsessed with finding her and he’s becoming less interested in upholding our family values. This isn’t how our little prince is supposed to behave! How can we possibly win the respect of the citizens of Hidden Springs if our children keep getting into trouble?

Please do what it takes to find our princess. I can’t bear to witness the great Vanderburg family name be sullied any further.

When you're in Hidden Springs, you can explore a stunning lakefront, relax at a luxury spa or ski lodge, escape into the woods, or even uncover ancient mysteries at the Museum of Magic and Supernatural. What will you find in Hidden Springs?

Hidden Springs has some references to the fairy tale Cinderella: The royalty of the world, the Vanderburg family is trying to get their "prince," Sebastian married. Lonnie Pertridge has a fondest wish to marry her daughters, Eunice and Astrid to the "prince," and they mistreat Ella Carlisle, Lonnie's step-daughter, who is obliged to perform domestic roles. Following Cinderella story, the "prince" would end up marrying Ella Carlisle and despise Lonnie, Eunice and Astrid. The players are, however, free to choose their fate.

Because of Hidden Springs mountain theme, most houses are made with wood. The richest households have, however, their houses constructed with different materials.

The Fountain of Youth is supposedly an item that ships with Hidden Springs, however, it has been reported by players that the item is not placed in the town when loaded, or that the item is either too difficult to find. Therefore, the players have to place it themselves if they want to play with it.

Lunar Lakes has references to Hidden Springs, such as a park with Hidden Springs themed stuff. It also has a descendant from the Vanderburgs, Sofia Vanderburg, who, opposed to her monarchic ancestors, is anarchic.

§20,000
Difficulty: 2
Carl Abbot, Maya Abbot
Carl Abbot is not too happy about being stationed in this secluded little town, but his wife thinks it will be good for them.

§35,000
Difficulty: 1
Ryan Anderson
Ryan Anderson, nature photographer, hopes catching the magic of the mountains on film will be his claim to fame.

§50,000
Difficulty: 1
Laila Al Fahad
Laila Al Fahad is a personal doctor to the wealthy, rich and famous. She specializes in modern medicine that utilizes the mountain springs and all it's benefits.

§125,000
Difficulty: 1
Bert Alto
Once a prominent accountant to the stars in Bridgeport, Bert has shown up in this delightful spa retreat with quite a lot of money in his pockets…

§25,000
Difficulty: 3
Bruce Chesterfield, Dennis Chesterfield, Scott Chesterfield
Bruce has moved his sons from the city, and into the heart of nature, hoping to instill in them his own love of the outdoors.

§100,000
Difficulty: 4
Simon Cho, Alisha Cho, Davy Cho, Minzi Cho
Simon Cho's feature films have been so successful he's decided to reward himself with an early retirement, bringing his family along.

§60,000
Difficulty: 2
Christoff Colby, Genevieve Colby
Christoff and Genevieve may be new to their fortune but they are determined to show the blue bloods a thing or two about class and sophistication.

§25,000
Difficulty: 2
Jenny Lho, Blake Grayson
Jenny and Blake have done everything together since they were small children… whether they've enjoyed it or not. Now these two frenemies are embarking off into the world independently… with some help from their parents funds of course.

§12,000
Difficulty: 2
Nicholas Riverhawk, Cassidy Earthsong, Jessica Willow
Drawn to the raw nature and mysteries of the mountain, Nicholas, Cassidy, and Jessica have decided to live a life of sustainable oneness with the Earth for as long as they can stand it.

Difficulty: 2
Hector Mendoza
Child Protégé turned world wide sensation, Hector Mendoza is looking for a quiet place to create his next masterpiece… and maybe even some romance.

§75,000
Difficulty: 1
Anna Menon
Anna Menon is the Queen of Fashion. From the catwalks to the fashion mags, she's had the final word. She's had a recent creative block and has come to the mountain spring to refresh and find new inspiration.

§15,000
Difficulty: 1
Madeline Moore
Madeline Moore loves everything about the mountains. She inherited a pretty penny from her treasure hunting Grandmother, but she's run through half of her fortune already! Will she be able to stay in town long enough to create a fortune of her own?

§35,000
Difficulty: 1
Ian Nali
Ian has been a Sports instructor to the rich and famous for as long as he can remember. Whether it's tennis, skiing, or the finer points of spending a fortune, Ian is your man! Provided, of course, you've got the cash to pay his fees.

§30,000
Difficulty: 1
Liam O'Dourke
Liam's traveled a far distance from the comfort of Sunset Valley. He's excited to further his research on the mysterious health benefits that the people of Hidden Springs enjoy. If only he were a little less intimidated by the flash and prosperity of the people themselves.

§20,000
Difficulty: 3
Lonnie Pertridge, Astrid Pertridge, Eunice Pertridge, Ella Carlisle
Lonnie Pertridge has moved here with her two "lovely" daughters in hopes that a royal wedding might be in their future. Too bad she had to bring the help -- er, her step daughter along as well.

§10,000
Difficulty: 1
Emmaline Rhoen
Emmaline Rhoen is the best healer this side of the mountain. Her practices may seem a little suspect to some but they always do the trick.

§20,000
Difficulty: 3
Carly Ruiz, Emmit Preston, Jake Preston
This Nanny took a trip with the family she works for only to get stuck with the two kids while the parents have disappeared!

§15,000
Difficulty: 1
Francisca Vanderburg
Sick of the constant talks about marriage and responsibility, Francesca has run off to live a life of peaceful solitude with nature.

§45,000
Difficulty: 2
Pierce Shawkti, Sidney Shawkti
Pierce Shawkti was a master on the slopes earlier in his life, but now he's focused on building a new life for himself and his daughter Sidney.

§10,000
Difficulty: 4
Granny Shue, Dany Shue, Carlotta Shue, Star Shue, Gary Shue
Granny Shue has always had a soft spot for children but for some reason she never settled down to have any of her own. Deciding that there were plenty of children in the world who needed a loving family she's adopted a brood of her own.

§50,000
Difficulty: 2
Jewel Song, Andrew Song
Jewel Song has an eye for all things sparkling… whether they belong to her or not. But this newly wed has vowed to turn over a new leaf and is willing to go through great lengths to hide the past her new husband knows so little about.

§6,000
Difficulty: 1
Louis Swete
Louis Swete doesn't like people much. He's lived in these woods all his life and the sudden influx of people might be too much for him to take…

§145,000
Difficulty: 3
Peter Winterly, Adele Winterly, Charles Winterly
The Winterly's have both blue blood and old money. Classic aristocrats they've been lured to town not only by the luxurious setting but also by the promises of healing for their sickly son, Charles.

These Sims are pre-made, but homeless when Hidden Springs is first loaded. 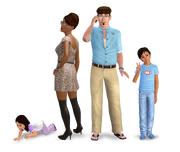 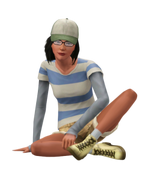 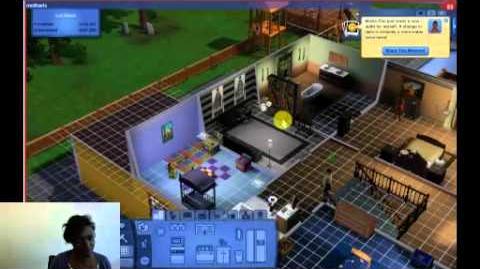