Herbert Goodie is a pre-made elder Sim from the secret sub-neighborhood Magic. He can be found in the Family bin with his wife Faith Goodie. Herbert and his wife are available with the The Sims 2: Apartment Life expansion pack. He has the Knowledge aspiration, and the Aquarius zodiac sign.

Herbert has no skill points at the start of the game, and his interests are randomized upon loading his family. When he and his wife are moved onto a lot, Herbert will be on his first day of the elder life stage, with a random number of days left before dying of old age. It is only referenced in the game files that he only has 1 day left.

Examining Herbert's SimDNA in SimPE shows that his hair was brown before it turned grey. He seems to be based in part on Herb Oldie from Pleasantview - they are both married elders and share (variations on) the same first name. Also, their surnames, when said together, might be an allusion to the phrase "an oldie but a goodie". 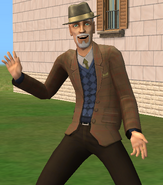 Add an image to this gallery
Retrieved from "https://sims.fandom.com/wiki/Herbert_Goodie?oldid=894551"
Community content is available under CC-BY-SA unless otherwise noted.