Heimrich Shimmy is one of the pre-made townies that resides in Bridgeport, the world introduced in The Sims 3: Late Night. He doesn't have any relationships at the start of the game. He can be made playable by befriending and asking him to move in, or by marrying him.

Heimrich is usually seen as a door bouncer. He is first seen in the first trailer of The Sims 3: Late Night, as the bouncer with the brown beard with red highlights and will usually perform that job in the game, however, he starts off unemployed.

Heimrich has three points in the Handiness skill. He has some tattoos on his body, and is quite fit. Often going unnoticed, he is also fat. Despite having brown hair, Heimrich's hair is grey at the roots which implies that his natural hair color is grey. He is 21 days from becoming an elder when Bridgeport is first loaded. 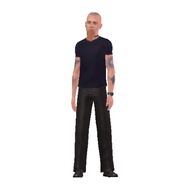 Heimrich's everyday clothing
Add an image to this gallery
Retrieved from "https://sims.fandom.com/wiki/Heimrich_Shimmy?oldid=915020"
Community content is available under CC-BY-SA unless otherwise noted.