The Hart family consists of Dorie, Gus and their daughter Bebe. Both parents have the Insane trait & the Childish trait. Poor Bebe is just trying to be a normal teenager, but how can she when her dad wears bunny slippers to the family picnic and her mom is swatting at imaginary pixies in the air? Is it best to just grow her up and move her out of there as soon as possible? Or would keeping her at home to care for her parents and help them live as normal a life as possible be the proper thing to do?

The three of them live on 303 Skyborough Blvd in Primrose, a 2br, 2ba, 30x40 lot. It is described as a "Remodeled two-story Victorian house with an accessible layout and open kitchen/breakfast nook area."

There are several other Sims with the surname "Hart" throughout the series, including Randy Hart from SimValley, Sam Hart from Belladonna Cove and Matthew Hart from La Fiesta Tech. They may also be ancestors of Simon Hart from Lunar Lakes. However, the relationship between them are unknown. 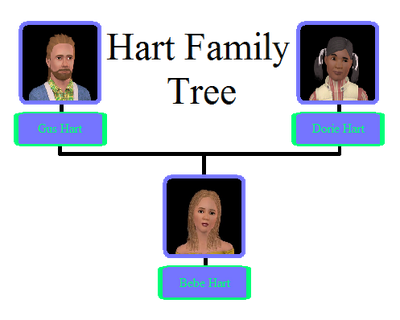 Add an image to this gallery
Retrieved from "https://sims.fandom.com/wiki/Hart_family?oldid=769377"
Community content is available under CC-BY-SA unless otherwise noted.