Hannelore Landgraab is a pre-made Sim featured in The Sims 3 for console who lives in Moonlight Bay. She is married to Malcolm Landgraab and they have a son named Adrien. Hannelore is a Division Manager in the Business career path. She is in her adult stage and a little younger than Malcolm, who is nearing the elder stage. Hannelore shares three traits with her husband: Schmoozer, Snob, and Ambitious. The latter two they also share with their son. 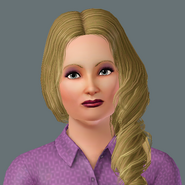 Add an image to this gallery
Retrieved from "https://sims.fandom.com/wiki/Hannelore_Landgraab?oldid=904048"
Community content is available under CC-BY-SA unless otherwise noted.