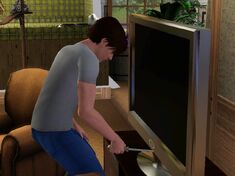 A Sim in The Sims 3 improving their handiness skill by tinkering with an object.

For the similar skill in The Sims and The Sims 2, see Mechanical.

Handiness is a skill in The Sims 3 and The Sims 4, which replaces the mechanical skill from previous games. It allows Sims to fix and upgrade various objects.

In The Sims 3, handiness is augmented by the handy trait.

Tinkerer
Tinkerers have finished at least 10 unique upgrades on household items. Installing the "Unbreakable" upgrade on multiple objects only counts as one unique upgrade, so it helps to experiment with different upgrade options! Tinkerers never fail when upgrading objects.

Settle an Argument
Reward: Cash
Location: Specified Sim
Description: [Sim] is a bit peeved with modern technology, and has taken the opinion that it's unreliable and breaks too often. Have a chat with [Sim] and provide a convincing argument about the greatness of modern technology. You'll earn a little money and improve your relationship with [Sim] for settling the disagreement.

Bring Back the Jams
Goal: Upgrade the Stereo and return it to [Random Sim]
Reward: Cash
Location: Specified Sim
Description: A Stereo belonging to [Sim] is barely pumping out tunes like it used to, and it's making [Sim] look really uncool. [Sim] will leave the stereo with you (in the family inventory) to Upgrade. Once you're finished, bring it back and [Sim] will pay you for the work.

Bad Reception
Goal: Repair the TV and return it to [Random Sim]
Reward: Cash
Description: [Sim] has a TV that's busted and there's nobody around to fix it. Take the TV set (It will be placed in your family inventory.) and whack it a few times to see if you can't get it working again. [Sim] will pay you for the repair work.

Not Music, Not Fun
Goal: Repair the Stereo and return it to [Random Sim]
Reward: Cash
Location: Specified Sim

The player can give both Unbreakable and Perfect upgrades to the same Teleporter by taking advantage of a glitch by completing the Perfect Teleportation upgrade first, then starting a new upgrade for Unbreakable, and canceling it after only some work is done.

Unclogging the toilet helps with the handiness skill.
Add an image to this gallery

In The Sims 4, handiness is mostly used to repair broken objects in order to not spend money by replacing them, or by calling a repairman. Handiness also determines the quality of craftable items made with the woodworking table. Raising this skill is one of the main objectives of the Nerd Brain aspiration.

Various objects such as televisions, toilets and sinks tend to break after numerous uses by Sims. A broken object is indicated by a visual cue such as stream of water, smoke or electrical sparks, depending on the type of the object. Repairs will always work no matter how low or high the Sims' handiness skill is, though having higher handiness will make these interaction go quicker. After a Sim has successfully repaired an object, they will gain a couple upgrade parts. A scrap pile will also appear, that Sims can scavenge to gain another part or two.

If a Sim with low handiness skills tries to repair an electronic object or is standing on top of a puddle of water, there is a higher chance of the Sim getting shocked. The Sim will gain the "Seriously Fried" moodlet, which will give the +40 dazed emotion for 3 hours, and causes smoke to pour out of the Sim. If the Sim gets shocked again with the moodlet, they'll be immediately electrocuted and die. There is also a chance of the object the Sim was repairing catching fire.

Having a high handiness skill allows Sims to upgrade various objects, by improving their functionality and making them unbreakable. In order to upgrade objects Sims must first have the required level and upgrade parts. Upgrade parts can be found while searching through the scrap piles left from repairing, or by breaking down and salvaging electronic objects. Sims can also purchase various upgrade parts from the computer after reaching level 2. It costs §10 to buy common upgrade parts, §30 for plumbing parts, §90 for kitchen parts and §120 for electronic parts.

Upgraded objects, while costing a small fortune, provide happy moodlets for Sims that can boost their current emotions, and can also add more functionalities to objects, such as new channels on the television. Some higher quality versions of objects, such as DJ booths[TS4:GT] and robot vacuums,[TS4:C&D] will have all of the upgrades already available, though they tend to be much more costly.

Handiness is also greatly affected by woodworking, which composes of crafting various forms of sculptures and unique furniture. Sims can start crafting at any level, though at lower levels of handiness they will have probabilities of crafting bad quality items. The sculptures can range from small decorations such as knife blocks to animals like bunnies, dragons and horses. Chairs and tables are usually the first forms of furniture that Sims can craft, before moving into actual functioning objects such as instruments, bathtubs and toilets at the highest levels.

All crafted items will have various levels of guality, ranging from poor, normal and excellent. Poor quality furniture will have jagged looks and be uncomfortable for Sims. Excellent items, however, sell for much higher prices and have better stats on comfort and environment. Being focused will help immensely with woodworking, increasing the chances of crafting items of excellent quality. Sims who are experiencing specific emotions and have reached level two in handiness can also craft emotional sculptures.

Retrieved from "https://sims.fandom.com/wiki/Handiness?oldid=851976"
Community content is available under CC-BY-SA unless otherwise noted.