Hal Capp is the second of four children born to Goneril and Albany Capp. He is the younger brother of Miranda Capp, and the elder brother of Desdemona and Ariel Capp. His cousins are Tybalt, Hermia, and Juliette. According to his bio, Hal is thoughtful and intelligent, despite his rough nature. This could mean that he is destined to have the Knowledge aspiration. He is friends with Bottom Summerdream at the start of the game.

Although Hal has brown hair, viewing his SimDNA in SimPE shows that his dominant genetics are for black hair, and his recessive genetics are for red hair, which means that Hal's natural hair color is black. He also has the recessive allele for grey eyes. Hal has the same facial structure as Curtis Ryan, minus the eyebrows. When the family is first played, Hal is 4 days away from becoming a teenager.

When editing in SimPE, Hal's skin tone genetics are not recognized. Because of this, he may sometimes produce a child with a different skin tone regardless if the other Sim doesn't have genetics for that skin tone. It appears that the installment of some expansion packs fix this strange behavior. The same happens with Vidcund Curious.

Also when editing in SimPE, Hal's zodiac sign is not recognized. This could explain why he doesn't have a zodiac sign mismatch in-game like most pre-made playable Sims from the base game do. 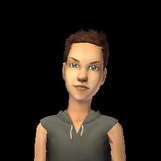 Hal's appearance in-game
Add an image to this gallery

Retrieved from "https://sims.fandom.com/wiki/Hal_Capp?oldid=914402"
Community content is available under CC-BY-SA unless otherwise noted.