The Sims Wiki
Register
Don't have an account?
Sign In
Advertisement
in: Services, Types of NPCs, Nightlife,
and 2 more
English 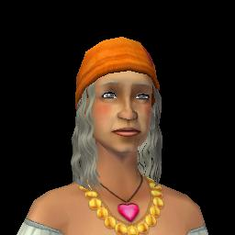 The Gypsy matchmaker is an NPC that came with The Sims 2: Nightlife and The Sims 2: FreeTime. The matchmaker can summon a blind date for a Sim (the Sim's compatibility with their date depends on how much the player decides to pay the matchmaker), sell Love Potion Number 8.5 for §350, or sell a cure for Vampirism[TS2:NL], Lycanthropy[TS2:P], Witchiness[TS2:AL], or PlantSimism[TS2:S] for §60. Sims can buy a single dose of a potion, or buy potions in lots of 3, 5, and 10.

In The Sims 2: FreeTime, if Sims in the household have a high lifetime aspiration and hobby enthusiasm, the matchmaker may sneak over to the house and leave a Dusty Old Lamp, which can be used to summon a genie.

The matchmaker is an unplayable NPC (barring hacks or cheats), but can be befriended by, and fall in love with, a controllable Sim. However, the only socializing actions normally allowed with the matchmaker are under the Talk, Flirt and Influence menus (which is much more limited than the Influence menu of a non-NPC Sim). She will stay on a Sim's lot for hours at a time, until she is greeted. She may even stay all day long.

She may appear on Downtown community lots, but the only way to be sure of reaching her is to use the phone. To summon her by phone, have a Sim call "Services", then select "Matchmaking Service". She will arrive within thirty in-game minutes. This can only be done on residential lots, as Sims cannot call services on community lots even if they have cell phones.

These matchmakers have their names randomized when the Downtown sub-neighborhood is created. Their names are only referenced in the game files. 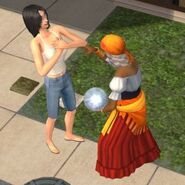 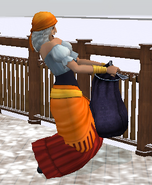 A Gypsy matchmaker preparing to leave a Dusty Old Lamp.