Not to be confused with Guitar skill.

In The Sims, The Sims 2, and all The Sims 2 based games, the guitar performance is controlled by the creativity skill, and in The Sims 3 and The Sims 4 by the guitar skill.

In The Sims: Livin Large, guitar performance is controlled by the Creativity skill. Sims will play better as their creativity goes up, and Sims who come to watch are more likely to respond positively.

The guitar is known as the Beejaphone Guitar, and resembles a Fender Stratocaster, more specifically the guitar used by Stevie Ray Vaughan, although with a different headstock design. The amplifier appears to be based on Fender's line of tube amplifiers.

Unlike The Sims 2 and The Sims 3, children can play the guitar for fun, even though they cannot gain skill points.

In The Sims 2: University, guitar performance is controlled by the creativity skill. As with other instruments, Sims play better as their creativity goes up. Also, as creativity climbs, Sims can play the instrument in slightly different ways. For example, Sims with high creativity can put the guitar behind their back while playing.

If three other Sims with similarly high creativity skills get together (four in total), they can each play the piano, drums and bass, producing a fantastic beat. Since each performer will have his or her own tip jar, four high-creativity Sims performing as a band can earn a fair amount in tips.

The guitar in The Sims 2: University is known as the Superflux Über UV Guitar, and somewhat resembles an Epiphone Casino.

In The Sims 2 and The Sims 2 Pets for console, Sims can shoot fire from the head of the guitar while playing.

Guitars are not available in The Sims 2 (PSP), even though it did contain some elements from The Sims 2: University.

In The Sims 2: Seasons, the career reward for the Music career track is a guitar known as The Rock Hammer. It increases the learning rate for the creativity skill by 400%.

If University is installed, the Perform... interaction is available, and The Rock Hammer can be played together with other instruments.

Unlike some other guitar models in The Sims, the Rock Hammer doesn't appear to be based on a particular model, and is instead just a generic "rock guitar", with a black paintjob, oddly shaped body and sharply pointed ends.

In The Sims 3, guitar performance is controlled by the guitar skill. The reputation Sims have with you will increase as they watch you play the guitar.[clarification needed] Sims have three options once they reach at least level five: to play for tips (money), to perform a song/composition, or simply to play. Performing a song makes a Sim reach the next level more speedily. Another option is unlocked at this level; when a Sim is with their significant other, they may serenade them. Guitars can be placed in the Sim's inventory and played on community lots.

Unlike the game's predecessors, the guitar appears to be an acoustic guitar rather than an electric due to the absence of an amplifier. This means that less space is required to place it on a lot.

The Sims 3 Store offers one additional guitar which is effectively just a reskinned Sonaflux Guitar. It is part of a steampunk set.[citation needed]

It appears to be based on real life resonator guitars, which contain large circular cones similar to the one on the Dulcinea. However, since it reuses the standard guitar sounds, it doesn't produce a distinctive sound.

In The Sims 3: High-End Loft Stuff there is an electric guitar for Sims with different properties from either the Sonaflux Guitar or the Dulcinea Guitar. It plays a clean electric note, instead of acoustic, and playing it at a low Guitar skill level can summon a noise complaint from neighbours, resulting in a police visit. It also generates a small amplifier when it is played, similar to the Sonaflux's guitar case when playing for tips. It plays all the same compositions as the Sonaflux, but with an electric tone to them. However, on the Sonaflux Guitar, 'A Perfect Moment' is a Bourrée style calm piece, whereas on the Das Kauker it starts off in the same way, but abruptly turns into a wild, improvisational electric guitar solo. The guitar itself resembles a 50s/60s Gretsch guitar.

In The Sims 3: Late Night, an exclusive electric guitar can be obtained as a gift received by a five-star celebrity. This guitar cannot be bought through buy mode without using cheats; however, it can be sold for §2000. This guitar's pointed bottom resembles the Ibanez ICT.

In The Sims 3: 70s, 80s, & 90s Stuff there is a guitar inspired by the 80s. While it looks like an electric guitar, it is actually an acoustic guitar and plays the acoustic guitar sounds. Despite having a name that implies a connection with Grunge music, the general design of the guitar more closely resembles those played by heavy metal bands in the 1980's, which the grunge movement, ironically, was strongly opposed to.

Players who are familiar with modifying game files can find the guitarElectricDecades OBJK and change the scriptClass to "Sims3.Gameplay.Objects.HobbiesSkills.ElectricGuitar" to make it sound like an electric guitar. (This is possible because the sound resources for an electric guitar are in the base game.)

In The Sims 3: Into the Future, this guitar is more of a futuristic feature. This is also the only guitar that has a body with a large hole.

In The Sims 4, any Sim aged teen or older can practice playing the guitar. Like The Sims 3, some guitars may look electric, but they all produce an acoustic sound when played.

A Sim needs a guitar in their inventory to be able to sing songs around a campfire[TS4OR].


+ Guitar skill
For PC and macOS players, this guitar is unlocked by signing up for an official The Sims 4 email newsletter, though they are free to unsubscribe from it afterwards. For console players, it is unlocked after linking either a PlayStation or Xbox account, respectively, with an EA account.


Inspiring Décor: 6
+ Guitar skill
Must be unlocked by reaching level 10 of the Entertainer career while in the Music branch. 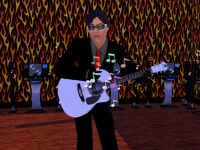 A Sim with a Sonaflux Guitar in The Sims 3. 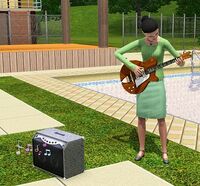 Tori Kimura rocks out with Das Kauker R86 in The Sims 3.

Jaylen Mace playing Grim's Ghoulish Guitar in The Sims 4.
Add an image to this gallery
Retrieved from "https://sims.fandom.com/wiki/Guitar?oldid=907014"
Community content is available under CC-BY-SA unless otherwise noted.