The Sims Wiki
Register
Don't have an account?
Sign In
in: Premade families, Families with 4 generations, Families from The Sims 2 (base game),
and 2 more
English

The Grunt family is a military family from The Sims 2. They live in Strangetown, a neighborhood that comes with the base game. General Buzz Grunt is the father of three sons named Tank, Ripp and Buck Grunt. Tank Grunt wants to be more like his father, while Ripp Grunt just wants some romance, and little Buck Grunt is just left out. His wife, Lyla Grunt, divorced him and was later electrocuted under mysterious circumstances. She is buried in the Specter family graveyard.

General Buzz and Tank have a grudge against the Curious family for being so strange, and the Smith family due to them being aliens, but Ripp and Buck have positive relationships with Johnny and Jill Smith, respectively.

The family picture to the right can give a pretty good image of the family members' personalities, and why they clash so much: Tank and Buzz are clearly domineering and tough. Ripp just seems lazy, while Buck appears to be more sensitive, thoughtful, and studious. Out of all their deceased relatives, only Lyla and Mary Melons can be resurrected.

When the family is first played, it is a Sunday morning.

Grunt -- Means to grunt. "Grunt" is also a derogatory slang term for "infantry". (US Military Slang from the Vietnam War)

General Buzz Grunt : his proper name could be Edwin, after Edwin ‘Buzz’ Aldrin, but that is speculative. (Edwin means rich, blessed friend). The name Buzz also might have something to do with the "buzz cut" haircut that a lot of army recruits get.

Tank Grunt (Gen. Buzz's oldest son): Probably a reference to his father being in the Army.

Mike Steel (Missy's father): Mike is short for Michael, means "who is like god", and steel as in steel, a metal alloy of mostly iron plus carbon, harder than pure iron but malleable when hot.

Mary Melons (Missy's mother): Mary means "to be bitter", while Melons as in melon, a type of fruit. So her name means, "bitter fruit," possibly a reference to the fact that they probably didn't mean to have Missy as she was born illegitimate, therefore making her a "bitter fruit." The reason why Mary does not have the same last name as Mike is that Missy was an illegitimate child. She was born outside marriage.

General Rock Grunt (Chip's father): The name rock could be referencing a sort of harshness as rocks are known to be very hard and solid.

Wanda Grunt (Chip's mother): Wanda is a German name that is known to mean family or wander. It is likely she is meant to be the opposite of her husband. 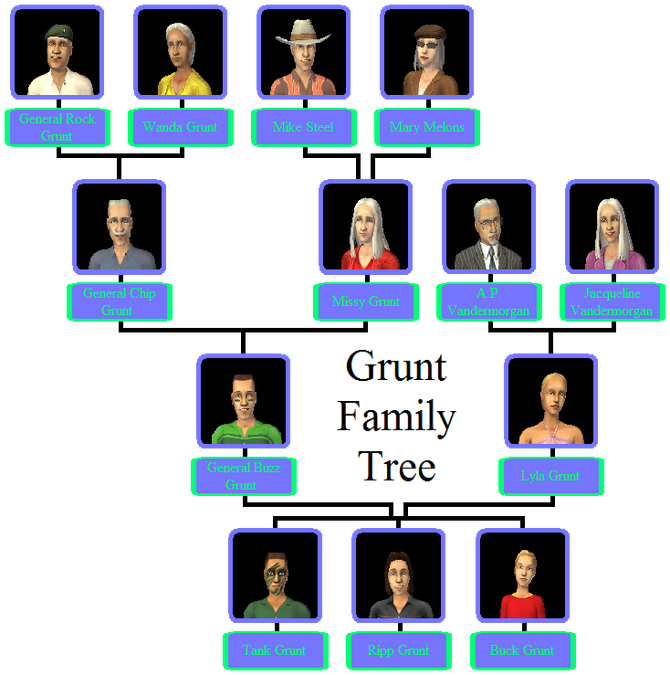 Buzz training with a young Tank