Griffin Torrent is a pre-made science geek who resides in Bridgeport, the world introduced in The Sims 3: Late Night. He is distant friends with Pin Yin, a female townie.

Griffin has five points in fishing, seven points in cooking, nine points in logic, and has mastered the gardening skill. His lifetime wish has nothing to do with his personality.

Griffin can be made playable by befriending and asking him to move in, or by marrying him. When Bridgeport is first loaded, he is 14 days away from becoming an adult.

Griffin's surname "Torrent" may be a reference to torrent files, since EA lost 9 million dollars from illegally downloaded copies of The Sims 3 in torrent files. He and Alexander French look very similar, with different hair color, skin color, clothes and glasses.

Unusually for a science geek, Griffin does not have the computer whiz trait. Like many other Bridgeport townies and NPCs, he only has three traits instead of the usual five he could have as a young adult. Often going unnoticed, he wears eyeliner. 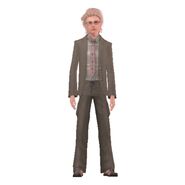 Griffin trying to catch the butterflies in his work outfit
Add an image to this gallery
Retrieved from "https://sims.fandom.com/wiki/Griffin_Torrent?oldid=915116"
Community content is available under CC-BY-SA unless otherwise noted.