The Greenburg family is a pre-made family that resides in Evergreen Harbor, a world shipped with The Sims 4: Eco Lifestyle. It consists of an elderly couple, Mary and Blossom Greenburg, as well as their adopted son, Knox.

Mary and Blossom, as well as their home, were designed by YouTubers Plumbella, Simproved and The English Simmer as Team Gnome as part of a challenge on The Sims Spark'd, a Sims game show. In Team Gnome's challenge storyline, the Greenburgs were an elderly couple living in Willow Creek who took in a mother and daughter who fled their home in San Myshuno. Due to winning the challenge, the Greenburgs were eventually added to Eco Lifestyle during development, with Simproved building their new home in the Port Promise neighborhood. Knox, who was already a main character in Evergreen Harbor, was retconned by the developers to be an adopted son of Mary and Blossom.[1][2][3]

Greenburg: Derived from the German surname Grünberg, which is composed of the words for "green" and "mountain".
Mary: Anglicized version of the Greek names Maria and Mariam, which are the names of several figures in the Bible.
Blossom: From the English word "blossom", referring to flowers.
Knox: Derived from the Old English word "cnocc", meaning "round hill". 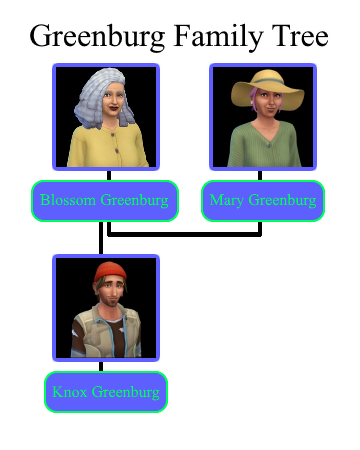 Retrieved from "https://sims.fandom.com/wiki/Greenburg_family?oldid=942451"
Community content is available under CC-BY-SA unless otherwise noted.