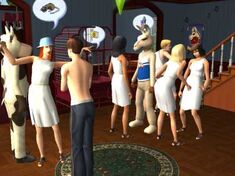 A toga party in a Greek house

Greek houses are available in The Sims 2 University expansion pack. They return as fraternities and sororities in The Sims 3: University Life, and as gender restrictions for university housing in The Sims 4: Discover University.

Sim State University and La Fiesta Tech each have pre-made Greek Houses. In addition, Sims can turn any on-campus residential lot into a Greek House by using the telephone and selecting "apply for charter." It costs 20 simoleons to start a Greek House, and a House will keep its charter as long as at least one member is living in it. Dorms and community lots cannot be Greek Houses.

As the residents of a Greek House gain more friends, the House goes up in rank. There are six ranks, and a House's rank can be checked by clicking on the Greek letters on the house. Each increase in rank increases the number of members that the Greek House can have. (Regardless of rank, a Greek House cannot have more than eight residents at a time, but members do not need to live in the House.) At the highest rank, Sims visiting campus may bring back objects as well as pizza.

In order to track and begin leveling up, the household must have a Greek letter decoration—without it, the Greek house will not be able to increase the member capacity or number of family friends.

Sims will only visit campus autonomously; the action cannot be selected. The "Visit Campus" action appears at random, and may appear at any time, regardless of what the Sim is doing. It may even appear while a Sim is asleep or at class. Even very shy Sims will visit campus in whatever they happen to be wearing. If Seasons is installed, they will also visit campus regardless of the weather—even in a thunderstorm or blizzard. The player can stop the Sim from visiting campus by canceling the action while he or she is still on the lot.

A Sim who brings back a pizza will stop near the mailbox, open the pizza box, and smell the pizza. The Sim will then find a surface to put the box on and will eat a slice, regardless of how hungry he or she is. If the player cancels the "Visit Campus" action after the Sim opens the box, the Sim will put the box down and will not eat any of the pizza. If the player cancels the action before the Sim opens the box, the pizza will disappear.

If the Sim is carrying a garbage bag, it will contain an item. The Sim will walk through the front door, and an object will appear. (Players should note that, if the House has an outbuilding, its door may be considered the "front door" for this purpose.)

Becoming a member of a Greek House can be done in three ways.

When the Greek House is the active household, members can ask other Sims to pledge the Greek House. Pledges can be influenced to do anything without using influence points, though they will still leave if their needs become low enough. After spending a certain amount of time on the lot, the pledges become full members. Greek House members can then ask these Sims to move into the Greek House.

Sims who become full members of a Greek House do not have to move into the House. When playing a Greek House, non-resident members are more likely to walk by, and may be able to use some objects that visitors normally cannot use.

Non-resident members of a Greek House who are on the lot can be asked to move in if there is room for them. Unlike the normal "Propose...Move In" interaction, this does not require a high relationship between the two Sims; any resident of the House can ask. A playable Sim who is a non-resident member of a Greek House can move into the House by using the telephone, if the House has room for another resident.

In The Sims 4: Discover University, fraternities and sororities aren't separate lot assignments, but rather special types of university housing. Gender restrictions for dorms can be set in their configuration panels, similar to configuring settings for a business.[1]