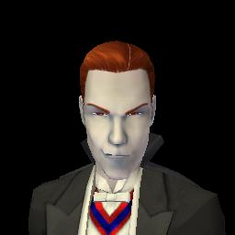 Count Armando Roennigke, one of the pre-made grand vampires

Grand Vampires, like all Downtownies, have randomly generated names. Their names, however, are preceded by 'Count' or 'Contessa', for males and females respectively. The Grand Vampires have greyish skintones, red eyes, and fangs. They only appear at night, and walk hunched over, with the arm hiding the lower face. This is called 'stalking'.

When a Sim asks a Grand Vampire to move in s/he will bring around §50,000 to the household, implying that Grand Vampires are quite wealthy.

The Grand Vampire wears a variation of the Nightlife Victorian suit and cape, the vampire adding gloves and a blue medallion, among other things. Their hair is always neatly combed. The Grand Vampiress wears a red variation of the Nightlife Medieval dress, which normally comes in blue or brown. They wear their hair long, with a silver headpiece sporting a red gem. These outfits can be accessed in Create-A-Sim by using debugging mode.

They are very well adjusted to the downtown area, as Grand Vampires always have the Pleasure aspiration, which is very odd since Pleasure sims have the fear of getting bitten by vampires. They will be attracted to going Downtown, and can only leave at night, when most Sims can be found there.

These grand vampires have their names randomized when the Downtown sub-neighborhood is created. Their names are only referenced in the game files.

Retrieved from "https://sims.fandom.com/wiki/Grand_vampire?oldid=891645"
Community content is available under CC-BY-SA unless otherwise noted.