Gladys Morse is a Sim who made her first appearance in The Sims 4. She appeared in several trailers and gameplay videos for the game. She can be found in the Gallery with her roommate, Vernon Morse.

Gladys was featured in many trailers for The Sims 4. Her first appearance was in the "Smarter and weirder" video. After that, she appeared in several others, such as "New Emotions" video and the Official Launch Trailer, among others. She also appeared on the original cover of the game. A render that shows all the Sims from the cover art as toddlers suggests that her hair was red before it turned grey.

Gladys is available for download from SimGuruZephyr's Gallery profile,[1] along with Vernon Morse. Her relationship with Vernon is unclear; they are roommates when downloaded, despite having the same surname and being referred to as an "odd couple" in the family bio. Opinions amongst players differ as to whether they are a married couple, mother and son, or siblings. It is implied that Chuck Cenzo is among her love interests.

Gladys on the cover

Gladys as a toddler (crying redhead with hat) 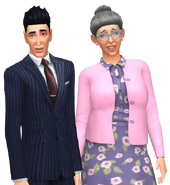 Retrieved from "https://sims.fandom.com/wiki/Gladys_Morse?oldid=905229"
Community content is available under CC-BY-SA unless otherwise noted.