Not to be confused with Girard family (Mesa Flats).

The Girard family is a family who lives in Champs Les Sims from The Sims 3: World Adventures. The family consists of an elderly single mother Claudine, and her grownup daughter Berthe. It is unknown who is Berthe's father, because he doesn't appear in the family tree nor mentioned in the game. This is a similar case to the Lambert family, who has no known mother, and both families live in the same neighborhood.

The family resides in The Clover House at 10 Orchid Road. They share the same surname with the Girard family from Mesa Flats. 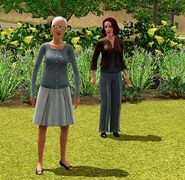 Add an image to this gallery
Retrieved from "https://sims.fandom.com/wiki/Girard_family_(Champs_Les_Sims)?oldid=890929"
Community content is available under CC-BY-SA unless otherwise noted.