Ginger Blackburn is Vera Blackburn's puppy. She has a very poor relationship with Vera and is enemies with her house-mate Walter. Her numerous low relationships and her negative traits, specifically her skittish trait, could imply abuse in one of her previous households.

Ginger's bio states that she is a troublemaker, and as a result of this, she has been to multiple households for lessons in obedience. Despite her small size, she has already caused lots of destruction. 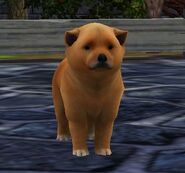 Add an image to this gallery
Retrieved from "https://sims.fandom.com/wiki/Ginger_Blackburn?oldid=903170"
Community content is available under CC-BY-SA unless otherwise noted.