The GilsCarbo Family is a family in The Sims 3. There are two separate families which are found in two different worlds that are set in different timeframes; Barnacle Bay and Monte Vista.

In Barnacle Bay, Alice GilsCarbo is a single mother raising her only daughter Celeste in a new town. They live in a small house on Old Fisherman's Pass, outside of the main village.

In Monte Vista, which is set earlier, Eduardo GilsCarbo and Carlotta GilsCarbo are taking care of their toddler son, Goopy. They live in Cozy Cottage, at 8 Via Veronaville.

The family shares its name with Goopy GilsCarbo, who is a townie from Pleasantview in The Sims 2. The game strongly hints at a connection, and strongly implies that the toddler Goopy from Monte Vista is the adult Goopy from Pleasantview. However, it does not formally show a relation between the adult Goopy and either GilsCarbo family from The Sims 3, thereby leaving any theories about possible relationships up to individual players.

Article speculation
The link between Alice, Celeste, and Goopy is unconfirmed by the video game developers 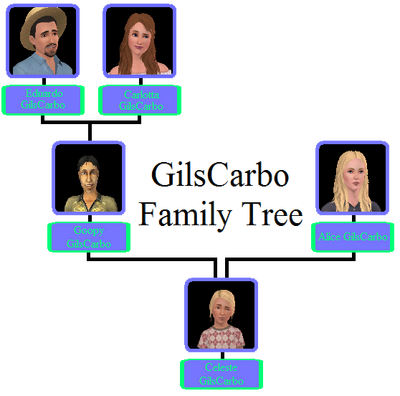 Retrieved from "https://sims.fandom.com/wiki/GilsCarbo_family?oldid=882307"
Community content is available under CC-BY-SA unless otherwise noted.