The Sims Wiki
Register
Don't have an account?
Sign In
Advertisement
in: Animals, Unleashed, Pets (The Sims 2),
and 3 more
English 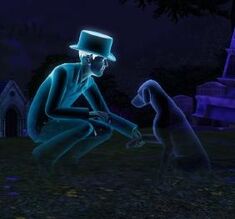 A ghost with a ghost pet.

In The Sims: Unleashed, dogs and cats, like Sims, do not age and have indefinite lifespans. However, like Sims, they can still die. In Unleashed, unlike later games, pets can starve and die in fires. When dogs or cats die, their gravestones will be different from those of human Sims, and their ghosts will appear occasionally. As with the ghosts of human Sims in the original game, ghost pets in Unleashed will be green regardless of their cause of death.

In The Sims 2: Pets, dogs and cats can only die of old age, and their ghosts are white. More often than not, a Sim may spot a beloved pet floating around the house at odd hours, though the Prima Guide for The Sims 2: Pets states that ghost pets will only interact with other ghosts. If University is installed, a pet can be brought back to life with the Resurrect-O-Nomitron. If both the owner and the pet are ghosts, the owner will pet it and/or play fetch if it's a dog. Ghost pets also play with each other if they had a good relationship when they were both alive. Ghost dogs will dig ghostly holes. Unlike ghost Sims, ghost pets can't haunt objects or scare other Sims.

In The Sims 3: Pets, pets can only die of old age or a meteor. If you try to drown Pets, they will teleport to the surface in the same way Sims teleport. Their ghosts can be either red if they have less than 10,000 Lifetime Happiness or blue if they have more than 10,000 Lifetime Happiness.[1] Like Sims, ghost pets can be resurrected at the Science Facility in the town or with Ambrosia.[2]

Just like ghost Sims, ghost pets can build relationships with living Sims and are able to interact with other animals. Ghost dogs can dig holes, ghost cats can hunt, and ghost horses can be ridden. An interesting thing about ghost horses is that they still have saddles on when they die.

Like Sims, pets can have ghost puppies, kittens, or foals. In order to do this, it is required to have a male ghost pet and a playable female pet if the player wishes the ghost puppies/kittens/foals to be playable. When born, they will have their own headstone in their inventory, and their family tree portrait is grayed out as if they were dead. They do not disappear at the end of the night and they can age. They are technically equal to a normal pet, but they have a ghostly appearance and they can produce ghostly offspring.

Pets can only die of old age in The Sims 4: Cats & Dogs. Sims can serve a deceased pet an Ambrosia treat to resurrect them. Like Sims, if a pet's tombstone isn't visited often, their spirit will begin to fade away and will eventually cease to exist. Players can get around this by summoning the pet's ghost and adding it to the household.

There is one pre-made ghost pet, Captain Whitaker. Others are randomly generated as needed, appearing at the pet graveyard on Deadgrass Isle.

Sims can easily adopt a ghost pet by travelling to Deadgrass Isle and going to the pet cemetery at night. Select friendly introduction and feed an Ambrosia pet treat to resurrect the chosen ghost pet of your choice and once revived, it will now be automatically adopted and will now be a part of the Sim's household. 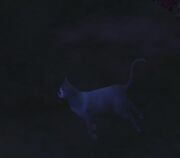 The ghost of a cat from The Sims 2: Pets.

Cat ghost from The Sims 3: Pets.

A Foal that died from a haunted curse, created by a mod.

A Cat that died from a jelly bean death, created by a mod.

A Horse that died from Transmutation, created by a mod.

Horses that died from jelly bean, transmutation, freezing, and ranting. All created by a mod. 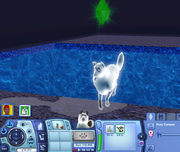 Drown ghost dog in game. This can done with teleport and drown glitch, cheat or mods. 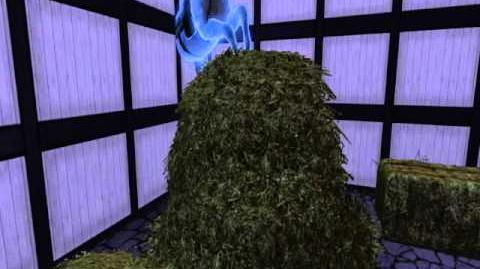 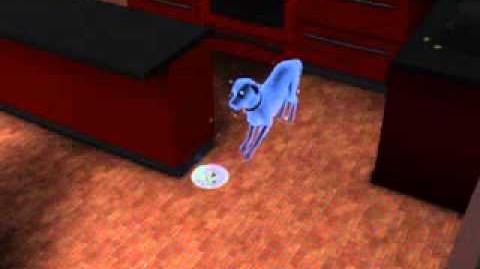