George Dean is a family man living in an abandoned firehouse in Riverview. He wants to do what is right, help others, and care for his family. His mother, Lonnie Dean, had tragically died in a fire, so he devoted his life to helping others. His father Bennie Dean took the death of his spouse hard and now depends on George for guidance. He visits his father as much as he can because of his love for his family.

He has a job in Law Enforcement as a Patrol Officer and is good friends with Hal Breckenridge and Walter Grisby. He also has the hidden Pyromaniac trait, and he is notable for being one of few Sims to have it, the others being Alan Stanley, Jessica Talon and Beau Merrick, all from Bridgeport. He has two skill points in Logic and Athletic. Due to his hidden trait, he may have started the fire that killed his mother, though this is merely speculation. 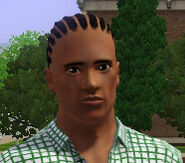 Add an image to this gallery
Retrieved from "https://sims.fandom.com/wiki/George_Dean?oldid=940126"
Community content is available under CC-BY-SA unless otherwise noted.