The Sims Wiki
Register
Don't have an account?
Sign In
Advertisement
in: Sims, Male Sims, Adults,
and 32 more
English

Geoffrey Landgraab (né Osteer)[1] is a pre-made adult Sim who appears in both The Sims 3 and The Sims 4, as a member of the Landgraab family in its respective world they are living. In both the main timeline and alternate timeline, Nancy Landgraab is Geoffrey's wife and they have a son named Malcolm.

Geoffrey is a pre-made adult Sim, who lives with his wife and son in Sunset Valley at 10 Summer Hill Court. He fell into a heap of simoleons when he married into Nancy's wealthy family. Geoffrey is much more down to earth than his wife, who is always grooming their son to be ready to take over the family's money. It would also seem that Geoffrey doesn't have that much power regarding the family.

When the family is first played, he is 18 days from being an elder, which makes him a couple of days younger than Nancy. Geoffrey is enemies with Nick Alto and Vita Alto, but his autonomous interactions with them are almost always friendly. This is probably because of his good sense of humor and charismatic personality.

Interestingly, Geoffrey is a Landgraab by marriage, not by blood. It states in the family bio that since Nancy's family pretty much founded the town, it wasn't surprising that he took her last name, instead of the other way around. Judging by the family tree, Geoffrey doesn't have any other family, living or deceased.

He works in the medical career as a gene therapist and has 5 points in logic, meaning that if he wants to get a promotion, he has to improve his logic skill. He also has 2 points in painting, 2 points in cooking, and 4 points in writing.

Geoffrey returns with his wife and son, and resides in Oasis Springs as part of the alternate timeline. He is an adult, 18 days away from becoming an elder. He works as a lead detective in the secret agent career track, wears glasses, and has a mustache. He has one point in both the charisma and video gaming skills, 4 points in the fitness skill and 6 points in the mischief skill. He is sweethearts with Nancy and friends with Malcolm and does not have relationships outside his family.

Geoffrey appeared in the official launch trailer, but with dark blond hair. In the official release, his hair color is closer to his The Sims 3 counterpart's. Until patch 12, whenever Geoffrey had to undress (e.g. taking a bath), he wears blue sweatpants instead of being in the nude.[confirmation needed]

A recent twitter post promoting The Sims 4: High School Years shows Geoffrey as a teen and revealed that in this timeline, he had the last name Osteer before he married Nancy.[1] This was the first time his family name was revealed.

Prior to the release of The Sims 4: High School Years, The Sims released promotional images of base-game adult and young adult Sims as teens, which included Geoffrey Landgraab. This version of Geoffrey has the surname "Osteer" because he is not yet married to Nancy. His traits are Outgoing and Good and he has one of the new teen aspirations, ..., giving him the Relatable reward trait. He likes the colors red and blue, classical music, and, strangely enough, mischief. Furthermore, Teen Nancy is romantically attracted to women, is exploring romantically, and willing to mess around with both men and women. The household bio also exclaims he already has a crush on Nancy. Geoffrey and the other teen Sims can be downloaded from the Copperdale Class of '00 household from Maxis' page on the Gallery. 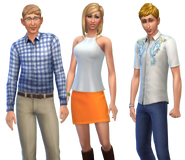 Geoffrey Landgraab taking a shower with blue sweatpants in The Sims 4. 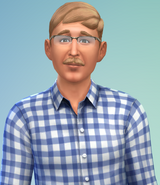