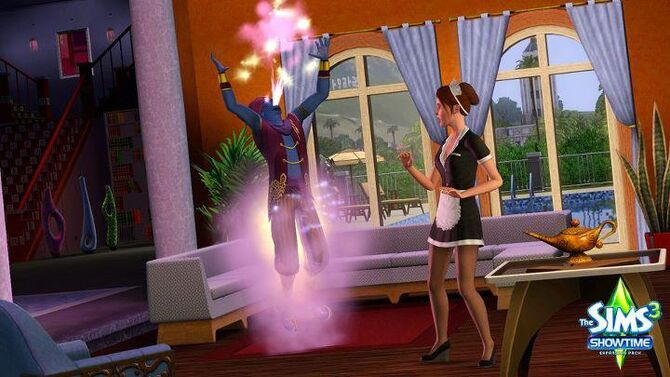 Genie
A life state and/or NPC · Featured in: 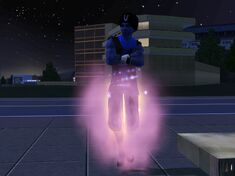 A genie in The Sims 3: Showtime.

The genie is an NPC that Sims can summon by cleaning an Antique Lamp[TS:LL] or rubbing the Dusty Old Lamp[TS2:FT][TS3:ST]. In the first three main games in The Sims series, a genie can grant various wishes on behalf of the Sim who summoned it, although in the first two games these wishes may turn out to have either positive or negative consequences. In Livin' Large and FreeTime, genies cannot be freed from their lamps or made playable, and regular Sims cannot become genies. In The Sims 3: Showtime, however, genies can become a playable life state, though a Sim still cannot become a genie without one of the elixirs featured in The Sims 3: Supernatural. If both Supernatural and Showtime are installed, genies will also appear as one of the life states that can be made in Create a Sim.

In The Sims: Livin' Large, the genie will give a Sim two choices for a wish upon being summoned. The player has no control over which choices are offered. These wishes will have ambiguous names such as "Air" and "Fire", which can obscure their outcomes. Wishes can go wrong, and almost always do; the genie in Livin' Large is not particularly adept.

A lamp can be cleaned once a day as long as it is on the lot. In addition, several wishes can be made in a day if each one is made from a different lamp.[n 1] The genie's ineptness is a way of balancing this.

Console games from The Sims Era[]

In The Sims Bustin' Out and The Urbz: Sims in the City, the genie appears in the GBA and DS[TU:SITC] games when the player's Sim dies, and resurrects the Sim.

The Sims Bustin Out GBA/NG[]

If the player's Sim passes out in The Sims Bustin' Out, the genie will appear, laugh at the Sim, and Teleport them to the hospital.

The Urbz: Sims In The City GBA/DS[]

The genie has same role as in The Sims Bustin' Out, and will return the Sim to the Bayou Twins shack if that Sim is on that quest. Otherwise, the Sim will be teleported to the Urbania Hospital. It is possible for the player to obtain the genie's lamp and teleport the Sim to a rest area containing motive-boosting objects such as a bed and a toilet.

The genie reappeared in The Sims 2: FreeTime and is found in the Dusty Old Lamp. He has violet skin and wears a waistcoat. His full name in The Sims 2 is Genie Midlock, but when hovering the cursor on him, he will simply be identified as "Genie".

He can be summoned by children or older Sims in the household. Any child[n 1] or older Sim in the household can make a wish, even if a different Sim rubbed the lamp to summon him. However, he grants three wishes to the object – not per Sim. Wishes can go wrong, but generally do not. After the genie has been summoned once, the lamp can no longer be sold. However, the lamp can be given as a gift even after the genie has been summoned and wishes have been made. There is no time limit on the lamp; wishes can be made at any time until all three have been made.

Until three wishes have been made, he can be sent back into the lamp by selecting the Dismiss option, or he will go back on his own if he is not interacted with for a while. Once three wishes are made, he will state that Genie Law requires him to leave, and return to the lamp, which will then levitate and disappear. Sims in a household with a lamp may roll a 1,500 point want to make a wish.

Warning
Do not attempt to add Genie Midlock to a household, or try to turn them into a supernatural creature, such as a vampire or a werewolf. Doing so can cause game corruption, fixed only by uninstalling and reinstalling the game.

To be awarded the genie, one or more Sims in the household must have high enthusiasm in a hobby and high Lifetime Aspiration, which will summon the Gypsy Matchmaker to deliver the lamp. For each Sim with a Lifetime Aspiration level of 7 or higher, there is a 2% chance (per day) that the matchmaker will bring the lamp.[n 2] The Gypsy Matchmaker may eventually deliver the lamp even if it is meant to belong to a Sim's dormmates, roommate, neighbor in the same apartment, or even a visiting Sim.

As a rule, one Sim in a household that receives a lamp will receive a memory of finding it, though this does not always happen. The memory is not always received by a Sim with high Lifetime Aspiration and hobby enthusiasm; it may be received by a toddler, or even a baby.

In Desiderata Valley's Aspir household, there is already a Dusty Old Lamp in the house.

After summoning the genie, there are six options to wish for:

Genie also appear in The Sims 2 for Console, though nothing usually happens when Sims interact with one. Also, when a Sim awakens a genie, all that will appear is the genie's head. Genies can be untrustworthy, and will sometimes trick Sims into giving them their money.

Good results of summoning the genie could be, raised motives, a plate of food, or money. If the genie has red smoke rising from the head, it is in a bad mood and can summon fires or burglars, decrease the Sim's mood, make the Sim wet themselves, and even strip the Sim of his/her clothes for a few seconds.

The genie's lamp needs to be unlocked to buy it. This is fulfilled by gaining a certain amount of aspiration points. When unlocked, it can be found under Misc. in buy mode.

The genie returns as both an NPC and a playable life state in The Sims 3: Showtime. Unlike genies in previous games, genies in Showtime can be male or female, and are mobile. Furthermore, Sims can now socialize and interact with them like regular Sims.[2][3]

Genies can be summoned by rubbing the Dusty Old Lamp, and will grant three wishes per lamp. After all wishes have been made, the lamp will disappear with the following message: "You have used your last wish, and the lamp has gone to seek another owner!"

Sims who give a "legendary" stage performance or who travel through the dimensional gate on a PlasmaPunch Gyroscopic Conductor may also receive a Dusty Old Lamp.[2] Alternatively, the Dusty Old Lamp can be purchased for 30,000 Lifetime Happiness points.[3]

Before a genie is released, they will be able to grant wishes to Sims. As in The Sims 2: FreeTime, any household member can make a wish, but unlike FreeTime, Sims can only make one wish every 12 hours, as genies need to rest for several hours after each wish.[3] Furthermore, every wish will be successful; there is no longer such a thing as a backfiring wish. Another difference from The Sims 2: FreeTime is that only the Sim who rubs the lamp can make a wish from the genie. To allow another Sim to make a wish, have the genie return to the lamp, and get that particular Sim to rub the lamp.

These are the wishes that Sims may make:

A high relationship with the genie is needed to release them. A Sim who wishes to free the genie must complete 3 different opportunities:

Summon the genie one more time, and they are released from the lamp forever. The genie will join the Sim's household and can be controlled by the player.

If nothing happens when this wish is selected, make sure the Sim making it has the "Special Opportunity" slot available.

After a genie is released, he or she will no longer be able to grant wishes to Sims. However, they still have the following magical abilities:

Genies in The Sims 3: Showtime also have approximately twice the lifespan of a regular Sim, and their needs are a light purple color. Genies also float instead of running when ordered to travel some distance not reachable by car.

After the genie is released, it is possible to marry the genie and even try for baby with them. The children of a genie will not be able to grant wishes. However, there is a 50/50 chance that the offspring of a normal Sim and a genie will have genie abilities, which will appear when he or she reaches the child stage. While genies have an extended lifespan, this does not affect the length of any life stages prior to Young Adult.[4]

Genies only appear in one quest, The Genie Lamp, which can be completed in two ways, the Monarch way (which involves finding the lamp and getting rid of it) and the Wizard way, which involves freeing the genie. Freeing the genie from the lamp will give the wizard the combination for the "Beacon of Hope" hidden spell and a mildly-powerful staff.

Genies are powerful wizards who were captured and enslaved in the lamp. They will often not give the right wish for fun, for example, people asking for a handsome suitor may get a person who makes suits.

If they are removed from the lamp incorrectly, they will destroy a large area around them.

The genie in Livin' Large being summoned by Bella Goth

A genie granting a wish

A genie, released from their lamp, after doing so, a genie can be controlled and customized

Genie Midlock added to the Household.