The Sims Wiki
Register
Don't have an account?
Sign In
Advertisement
in: Simology, The Sims 3, The Sims 2, The Sims 4
English

Genetics are traits such as hair color, eye color, or skin tone that Sims have, and can pass to their children. In The Sims, genetics did not exist, and a baby that grew into a child received a randomly selected body and head skin. Genetics were officially introduced in The Sims 2. In Create a Sim for The Sims 2, The Sims 3, and The Sims 4, once the player has made one male Sim and one female Sim, they can create a child for the couple that has the genetics of both parents. In The Sims 4, players can also create a genetic child for Sims of the same gender.

When viewing a Sim's DNA in SimPE, one set of genes will be shown as dominant, and one as recessive, but this may or may not reflect whether the game treats a gene as dominant or recessive. The genes are shown as alphanumeric strings, as follows:[1]

The game considers certain eye colors and hair colors as dominant and some as recessive.[2] If a baby gets a dominant and recessive gene for eye color or hair color, the dominant color will always be visible. However, if the baby gets two dominant (or recessive) genes for eye color or hair color, one will be randomly selected as "dominant". That color will be visible, and that gene will show as "dominant" in SimPE. The other will be carried as a recessive and will be shown as such in SimPE. It should be noted that, while alien eyes are dominant, the alien eyes will look identical to brown ones, should the Sim not also express the alien skin tone.[3]

Skin tone is passed in the same way. However, if a Sim receives two genes for normal Maxis skin tones, those genes define the ends of a range in which 1 is light skin, 2 is tan, 3 is medium, and 4 is dark. Within that range, all skin tones are equally likely, and which one the baby has is determined at random. For example, a baby who gets a gene for tan skin and one for dark skin may have tan, medium, or dark skin. In SimPE, these genes will be shown as "SkintoneRange". While one will be shown as "dominant" and one as "recessive", the game itself does not treat any normal skin tone as dominant.

The alien skin tone appears to be a special case. Like custom skin tones, it is outside the 1-4 range, and is generally treated as dominant, but how this is expressed depends on other conditions. The alien skin tone does not appear to be truly dominant unless one parent is homozygous for it. If neither parent is homozygous for the alien skin tone, and the baby gets both that gene and a gene for a normal Maxis skin tone, the baby may express either gene while carrying the other as a recessive. So, it's possible for the child of an alien-Sim hybrid to receive and carry the alien-skin gene while expressing a normal skin tone and then have a green-skinned child.

Additionally, for cats and dogs created in CAS with hetero-chromatic (two different-colored) eyes, only the phenotype displayed in the pet's right eye will be present in their genetic code.[TS2:P]

The Sims 2 allows the creation of custom hair, eyes, and skin tones, and many are available for download. These custom items are usually treated as dominant, and they have additional effects on genetics.

Hair
How custom hair behaves genetically depends on whether or not it has been placed in one of the Maxis color bins. Custom hair that has been properly "binned" as black, brown, blond, or red behaves the same as Maxis hair, though it will still have the custom-content "star" in CAS and change appearance. Like Maxis hair, it may be randomly assigned to a Sim when his or her genetics are determined.[4] Each custom hairstyle that has not been "binned" has its own genetic code. A Sim who inherits a custom-hair gene from a parent of the same gender will receive that style.[5] However, a Sim will not have custom-hair genetics unless he/she inherited them, or was given hair from the Custom bin when created in CAS, as Change Appearance does not change genetics.

Eyes
Eye dominance is on a scale of 0 to 4. Maxis-dominant is at 1, and Maxis-recessive is at 2; values greater than 2 are usable but unused. By default, custom eyes are at 0, which makes them "super-dominant" overall Maxis eyes. However, some content creators may "geneticize" eyes by editing this value.[6]

Genetics in The Sims 2 can also determine the personality of a Sim. If both of the parents of a child each have four nice points, for example, it is likely that the child will also have four nice points. However, this isn't always the case; two shy Sims most certainly can have an outgoing child and vice versa. The point assignment comes from the mother, father, or completely at random.

A born-in-game Sim can have between 25 and 35 personality points, whereas a Create-A-Sim Sim can only have 25. Personality points are assigned to each trait in random order. If the number of points at any time reaches 35, then every trait being set thereafter will have no points in it. On the other hand, if, after setting all five traits, the point total is less than 25, then points will randomly be assigned to any traits with low numbers until the point total equals 25.

Spawned PlantSims will always have the same personality as their parent, though they will have different zodiac signs.

Facial features are also genetically reproduced from parent to child in the game. For example, if a parent has large eyes, the child may have the same large eyes. Facial features do not, however, cancel each other out - for example, if one parent had a large nose and the other parent had a small nose, the child will not automatically have a medium-sized nose - they will have either the large nose or the small nose.

Two of the default CAS face templates, the 21st and 25th, are not linked correctly to other ages. Instead, they are linked to the 2nd template. Sims created using these templates can pass this "brokenness" on to their descendants.[8][9][10][11][12] There's a mod that can fix this, but it will not affect existing Sims who use those templates.

The Sims 2 is subject to what is known as the "first born effect"/ "first born syndrome"[13], in which all single children born in a family have the same genetics. This happens because the randomizer which affects Sim genetics always starts at the same point each time the game is started. The "first born effect" can be mitigated during a game session by going into CAS and clicking on the "Randomize" button several times, as this seems to "shake up" the randomizer. It is not necessary to save the random Sims that are generated. The Lot Debugger, or "Batbox", available from More Awesome Than You, has a feature that essentially automates this process.[14] There is also the RPC Launcher by Lazy Duchess that includes a fix that removes the "first born syndrome" altogether.[15]

"Make a Child" will only mix the genetics of two adult Sims. While elder males can impregnate adult females in-game, "Make a Child" does not recognize this.

Genetics in The Sims 3 are much more simplified. There are no dominant and recessive genes, and the game simply combines features of the parents, pulling occasionally from earlier generations such as grandparents. There is a very high mutation (i.e. two dark-haired parents having a child with blonde hair, even though nobody in their family has that hair color) rate of 10%, which can be lowered to a more reasonable rate using mods.

Skin tones are blended by The Sims 3 genetics. For example, a Sim with light green skin and another with dark blue can still have a child with dark green or light blue skin, as the light or dark and hue are handed down separately.

Sims may pass on traits when traits are randomly determined.[16] Sims can also inherit hidden traits from their parents; there is a 50% chance of passing one of these traits on if one of the parents has one.

The Sims 4 shows a wide variety of mixed features. The children tend to come out with features ranging from exactly like the one parent to an in-between mix. It appears that there are no recessive genes in The Sims 4 that are passed down. This makes it impossible to inherit a gene from a grandparent or any other ancestor unless one of the parents displays the trait.

Hair color tends to come out as one of the parents. If one parent has brown hair and the other blonde, the offspring will have a 50% chance of having either. When a Sim with an unnatural hair color such as blue or pink has a child with a Sim that has a natural hair color, the hair color of the child may not be the same as either of the parents. The same applies to hair texture; however, if a Sim inherits their hair texture from one parent, they will also inherit its hair color as well. For example, if one parent has straight blonde hair, and the other parent has afro-textured black hair, the offspring can only either have straight blonde hair, or afro-textured black hair.

The genetics of two adult Sims in The Sims 2.

An example of genetics in The Sims 2. 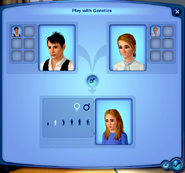 An example of the "Play with Genetics" feature in The Sims 3.

An example of genetics in The Sims 4.