The Sims Wiki
Register
Don't have an account?
Sign In
Advertisement
in: Game guides, The Sims 2 game guides

Game guide:Which NPCs are safe to play as? 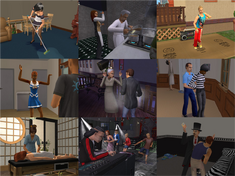 This article describes features that are only available in The Sims 2.

You may know some of the townies and non-playable characters (NPCs) available in the Sims 2, but playing with some of them is considered to be dangerous and a threat to the game (the neighborhood itself and the game as a whole, including installation files), though, some are just considered to be annoying and others are actually safe to play and add to households.

The dangers of certain NPCs[]

Dangerous NPCs are objects or characters that, if played with and have anything changed about them, may threaten the safety of your entire game. They should never be played with and/or added to a household. The following list consists of NPCs that are considered to be dangerous. Each NPC is listed below with the reason to why they are NOT safe and are dangerous when interacted with in any other way than what the game intends to. You may also want to consult the article on avoiding corruption first, for more details about how interactions with certain NPCs will affect your neighborhood and your Sims 2 game installation files. Interacting with these NPCs:

1. By using the options allowed by the game in normal game play without cheating, AND
2. By setting your objects.package files to read-only status,

Are considered safer and should not affect the integrity of your game.

A general rule of thumb to know whether an NPC is dangerous or not, is by not playing with those without a "proper name" i.e., Wise Old Man is not a proper name, whereas Brandi LeTourneau is a proper name. There are some exceptions, such as Rod Humble, who has a "proper" name yet is not a "safe" NPC. Read the following list carefully to make sure which NPCs are safe and which aren't.

Another rule of thumb; if cheats are the only way to make a certain NPC selectable, you're best leaving them alone. There are a few types of NPCs that can't be made playable without cheats but are safe to do so, as listed below.

NPCs who are considered dangerous[]

NPCs that are not safe to play as and/or to add to your household because they are objects in your game's objects.package file: Messing with these may result in having to reinstall the entire game.

NPCs that are not safe to play as and/or to add to your household because they have incomplete user data: This will eventually corrupt your neighborhood and make it unplayable

NPCs that are believed not safe to play as and/or add to your household:

NPCs who are considered safe[]

NPCs that possess annoying hard-coded behavior but are safe to play as and/or add to your household. These glitches may be fixed using Cyjon's Debugger.

These NPCs usually have normal names (i.e. Gordon King, BJ Ryan, Marie Mazza, etc.) - and the rule of thumb at the beginning of the page notes that characters with normal names are considered safe. Be aware that not all NPCs with "normal" names are safe to play as.

NPCs that are safe to play as and/or add to your household:

These NPCs will also have a "normal name".

What happens if you add them[]

Most unplayable NPCs cannot be added even through the use of the testing cheats, although it is possible to use mods and hacked objects to add them. When added to a family, these NPCs can be invited over by other families and may even appear on community lots.

The following is a list of NPCs and their behaviors when they are made playable. It should be noted that adding an unplayable NPC will cause corruption and should not be attempted. The following results were obtained when playing the game with the game files set as read-only.