Warning
This tutorial requires you to know basic knowledge and understanding about save game folders, game data directories, restarting a neighborhood, and so on. If you are reluctant to mess up with game folders, avoid doing this. Side effects may occur if the tutorial is not followed properly. 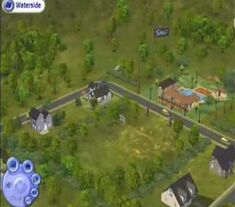 This tutorial is for The Sims 2 only.

Sick of seeing the same townies and NPCs from Pleasantview in your custom neighborhood? Tired of the same Social Group Townies and Garden Club Members? This tutorial will help you create a custom neighborhood without Goopy GilsCarbo and Glen Deppiesse in every one of them! Here's the steps. (The original tutorial can be found at MATY by jordi)

In case of new NPC or Townie spawn, you might need the following mods:

Custom neighborhoods always create the same set of townies from Pleasantview. To prevent that, you need to go to your game directory, located at C:\Program Files\EA Games\The Sims 2\ assuming you installed the game in the default location. Browse your Neighborhood folder in The Sims 2\TSData\Res\UserData\Neighborhoods. If you have The Sims 2: Ultimate Collection, the directory will be C:\Program Files (x86)\Origin Games\The Sims 2 Ultimate Collection\Double Deluxe\Base\TSData\Res\UserData\Neighborhoods. Rename N001 to N001-bak to disable it. Once you're done creating your neighborhood, you can re-enable it by removing the "-bak" part.

Pets, Seasons, Bon Voyage, FreeTime, and Apartment Life all create the same special townies and NPCs for custom neighborhood. You will need to replace those stealth hood templates with empty ones so the game can't read them. First, download the empty stealth hood templates, and then extract the files.[1] Navigate to the C:\Program Files\EA Games\(EP)\TSData\Res\NeighborhoodTemplate\ folder and perform the following:

For Pets, it will be folder P001. Move that folder to a folder on your Desktop (you can call it "TS2 Original Stealth Hood templates" to avoid getting them mixed up), then extract the downloaded P001 folder to that location.

For Seasons, it will be folder G002. Move that folder to a folder on your Desktop (you can call it "TS2 Original Stealth Hood templates" to avoid getting them mixed up), then extract the downloaded G002 folder to that location.

For Bon Voyage, it will be folder V001. Move that folder to a folder on your Desktop (you can call it "TS2 Original Stealth Hood templates" to avoid getting them mixed up), then extract the downloaded V001 folder to that location.

For FreeTime, it will be folder F002. Move that folder to a folder on your Desktop (you can call it "TS2 Original Stealth Hood templates" to avoid getting them mixed up), then extract the downloaded F002 folder to that location.

For Apartment Life, it will be folder E002. Move that folder to a folder on your Desktop (you can call it "TS2 Original Stealth Hood templates" to avoid getting them mixed up), then extract the downloaded E002 folder to that location.

Warning
Do not, under any circumstances, use the deleteAllCharacters cheat to remove all Sims from a neighborhood! Doing so will destroy part of all the character files in the neighborhood and leaves lots of junk, orphaned information, and will corrupt the neighborhood!

If you want to create a default sub-neighborhood (C:\Program Files\EA Games\(EP)\TSData\Res\NeighborhoodTemplate\), you need to follow the instructions here.

You may create your own Townies for your neighborhood or just let the game create them by itself. If you've disabled the N001 folder in the second step, townies and NPCs will never be generated because the game can't access the folder that contains their data. To get the game to generate the NPCs but not the townies, remove the "-bak" part of the folder and get the "notownieregen" mod, listed on the top of the page. Having this mod will allow the game to generate NPCs, but doesn't allow it to generate townies.

The second method is to shift+click mailbox and choose *DBG - FORCE Create Townies - and choose Townies and/or Downtownies.

When you're done, save the game.

If you have the Simlogical Teleporter Cat, you can create your CAS Townies, Dormies, Downtownies, Strays, and Social Group Townies. You will need SimPE to change their names or read the tutorial here. Next step, create your CAS Sims and Pets in any gender and ages. You are free to make however many Townies you want.

When you're done, move your Sims into a lot, and use the teleporter to make them a townie by choosing Make me a... - Townie, Downtownie, etc. For Pets, you need to use a Sim and choose Make stray... - your pet's name. You might want to choose a unique name in case you're confused. When you're done, save and quit the game.

Now, open SimPE. Delete ALL relationships that you see. Note that if you create Child or Teen townies, they MUST have a family relationship with someone older. In this case, delete their family tree, unless you want to make a special case, such as Townies in Downtown having a family relation to certain playable Sims. You may also set their careers, skills, gender preference, hobbies, and so on. Otherwise, the game will set them randomly.

When you're using Windows 7 or 8, you need to delete the files in the virtual store or the same townies will appear again and again. So, after you've done all that is described in this amazing tutorial, after shutting down the game as soon as the neighborhood you just created shows up, open cms by pressing the Windows key + R at the same time. Then type in "%temp%" without the " and press enter. Click on local, scroll down until you see a file called Virtual Store, open it, and then you have to do 2 things: First, set up you as the owner of the folder and set it to "read only"/write protected. Second, delete the EA Folder in there. Not only will your game load much faster, no more townies will spawn unless you've created them.

This tutorial was a Featured Game guide in January 2012. Its layout and content is an example of excellence on The Sims Wiki.
Retrieved from "https://sims.fandom.com/wiki/Game_guide:Creating_a_clean_neighborhood?oldid=928912"
Community content is available under CC-BY-SA unless otherwise noted.