For the skill in The Sims 4, see Video Gaming.

Game consoles are objects in The Sims, The Sims 2, The Sims 3, and The Sims 4: City Living. Sims can use them to play video games, which in turn increases their fun (unless they have the Technophobe trait[TS3]).

The Sims introduced a basic virtual reality set that Sims can use. Sims will pick up the device, wear it over their eyes, and "explore" the virtual world, usually by waving or moving their arms. When finished, Sims will replace the device in its original location.

All Sims, including children, can use the device. While they will move around on the spot, they will not move from the spot they are standing on.

In The Sims 2, there is a basic video game console, the Maxis™ Game Simulator, which can be purchased from buy mode. When placed next to a TV, it allows one or two Sims to play. If two Sims play, they will not build relationship with each other, but each will gain Social, and may taunt each other as they play. Some games will use a different display when two Sims play. The video game console can break, though the chance of this happening appears to be small.

SSX 3 comes ready to play without any additional purchases. Other games (such as The Sims Bustin' Out and SimCity 4 Rush Hour) can be bought from video game racks on community lots. These three titles can be seen if the player zooms in on a rack. FreeTime adds four new additional video games to video game racks, as well as The Sims 3 if the player opens Rod Humble's gift. All games, including those just bought, are available on any computer or game console in the household. When a Sim visits a community lot that has a computer or video game console, all games which are available on the Sim's home lot will be available.

If FreeTime is installed, playing with the game simulator will raise Enthusiasm for the games hobby.

The Sims 3 includes a basic game console and VR set. The SimLife Goggles increase fun rapidly and cause many moodlets. On video game console, as with computers Sims can be seen playing Burnout Paradise, Skate, "FIFA" (where Arsenal are a team on screen) and Madden NFL. If The Sims 3: Ambitions is installed, Sims can also be seen playing "Sim Animals: Africa."

The fun gain rate of the video games depends on the TV set. The higher the fun rating a TV has, the faster the fun need will increase.

The Console 7 and GUGA JoyToy 3 are added with The Sims 3: High-End Loft Stuff. They have more games, better graphics, and are more expensive. The Sims 3: Generations adds the ExoEdge Gaming System by ReliableWare.

The consoles introduced in subsequent expansion packs are a reference to the PlayStation 3 (due to its lack of highly acclaimed first party games on launch), the Xbox 360 (due to the number of AAA violent games) and the Wii (peripheral controls).

The SimLife Goggles, a virtual reality headset, can be used for many things other than gaming, when combined with cheats and/or mods.

A Sim with the SimLife goggles

A Sim playing video games on his computer

SimLife Goggle making a Sim float.
Add an image to this gallery

The Sims 4 City Living adds 2 game consoles, and a game controller. The new consoles introduce five exclusive console games that provide emotional moodlets upon a successful gaming session. It can also be played with friends for a social boost and will impart the winner with a +2 playful or energized emotional moodlet while giving a +2 playful or +2 angry if they lose. It can be upgraded to provide more fun points, made unbreakable and television screen override. 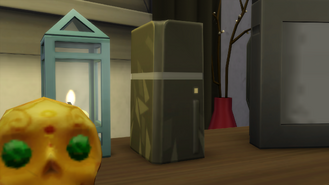 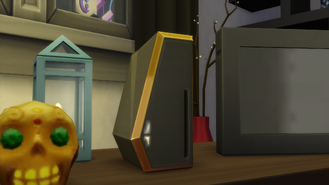 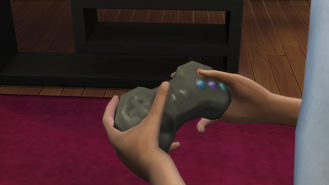 Controller
Add an image to this gallery

Retrieved from "https://sims.fandom.com/wiki/Game_console?oldid=861997"
Community content is available under CC-BY-SA unless otherwise noted.