Gallagher Newson ( /ˈɡaːlʌɡər njusʌn/) is a pre-made child Sim from the secret sub-neighborhood Magic. He can be found in the Family bin with his five adoptive siblings Ginger, Gavin, Gabriella, Georgia, and Garrett Newson. Gallagher and his family are available with the The Sims 2: Apartment Life expansion pack. He was the fourth of six children adopted by Gloria Newson.

Upon Gloria's death, the siblings were forced to find a new home. Gallagher's bio suggests that he is very shy, and the most introverted of the six, but he's slowly coming out of his shell. He is on the first day of the child life stage, making him the same age as Gabriella. When the family is first moved onto a lot, Gallagher will be 8 days away from becoming a teenager.

When viewing his character data in SimPE, it can be seen that Gallagher doesn't have a gender preference at the start of the game. This is also the case of the rest of his siblings, and Isaiah Gavigan. Gallagher, along with Gabriella, has a hidden toddler thumbnail. This can be found by viewing his character files with SimPE. 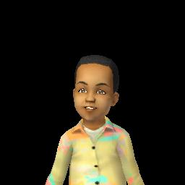 Gallagher's hidden thumbnail
Add an image to this gallery
Retrieved from "https://sims.fandom.com/wiki/Gallagher_Newson?oldid=745090"
Community content is available under CC-BY-SA unless otherwise noted.