Gage Briody is a pre-made townie living in Sunset Valley who can be seen wandering around town. He does not have any skills and relationships at the start of the game. He can be made playable by marrying him, or asking him to move in.

He also has a double who is exactly like him, who can be found in CAS saved Sims. All of his facial characteristics have sliders set to neutral. This occurs with all other Sims randomly generated by the game as well. This is nicknamed "pudding face", and this feature has become somewhat infamous among the community.

Because his hair is shaved and his eyebrows are brown, his hair appears to be brown. But, if he is given a longer hairstyle it can be seen that his hair color is actually a shade of blond.

If story progression is left on, he will always move into a vacant lot and live with Artie Page and Dave Ramsey. 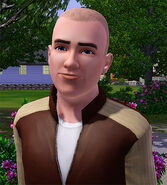 Gage's actual hair color is revealed, when given a different hairstyle.

Gage talking to a CAS Sim in his firefighter uniform

Gage's outfits
Add an image to this gallery
Retrieved from "https://sims.fandom.com/wiki/Gage_Briody?oldid=920994"
Community content is available under CC-BY-SA unless otherwise noted.