The Funke family is one of the family bin families and can be placed in any lot or neighborhood in The Sims 3. The family consists of Rhett Funke, his wife Sabrina, and their three children, Irene, Carol and Spencer.

Like Gobias Koffi of Sunset Valley, the Funke family are an apparent reference to the TV series Arrested Development, as several characters in the show share the surname Fünke (pronounced "FYUN-kay"). However, unlike Gobias, none of the members of the Funke family seem to directly reference any characters from the show. There are few similarities between them other than Rhett's Never Nude trait being shared with a character on the show (who is also the direct inspiration for Gobias), and the shared general premise of their being a large, eccentric family.

Funke: German for "Spark"
Rhett: speaker. From Latin origin.
Sabrina: Derived from the name of the river, Severn.
Irene: Derived from the Greek word eiréné, "peace".
Spencer: It is of Middle English origin, and it means "dispenser of provisions".
Carol: In French Carol means song of joy and in English it means strong. 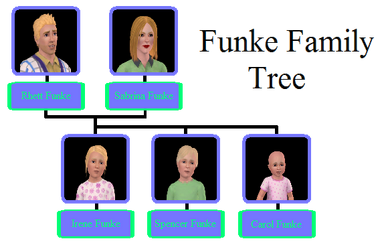 Spencer Funke
Add an image to this gallery
Retrieved from "https://sims.fandom.com/wiki/Funke_family?oldid=829250"
Community content is available under CC-BY-SA unless otherwise noted.