The Sims Wiki
Register
Don't have an account?
Sign In
Advertisement
in: Sims, Female Sims, Elders,
and 32 more
English

Although the family bio states that Samuel is Frida's uncle, they aren't considered related and can even freely romance each other. This is because there is no Victor Goth in Moonlight Falls to tie them together as uncle and niece. 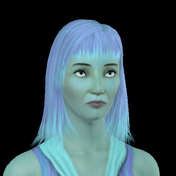