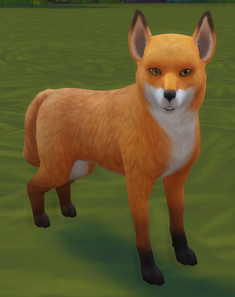 Foxes are present in The Sims 4: Cats & Dogs as a small dog breed with a unique fox voice. Foxes also appear as NPCs in The Sims 4: Cottage Living during certain challenges.

Like other dog breeds, foxes and fox crossbreeds occasionally appear as randomly generated strays in Brindleton Bay, as well as pets in randomly generated households. They can be adopted by Sims and can mate with dogs. The default traits for foxes are independent and troublemaker. Aside from their appearance and voices, however, they behave like normal dogs.

The Cottage Living versions have more fox-like animations and cannot be adopted like the Cats & Dogs versions. Foxes only appear with lots that have the "Wild Foxes" lot challenge; every lot in Henford-on-Bagley has this enabled.

Foxes can attack and kill chickens, and wild rabbits, but there are multiple ways for players to prevent fox attacks. Sims can shoo foxes that are preparing to attack other animals. Foxes can also be befriended with gifts from a Sim's inventory; the fox will not attack that Sim's animals. Sims with a high enough handiness skill can upgrade a chicken coop with a "Fox Be-Gone Alarm." Owned llamas and pet dogs can ward off foxes by spitting on them or chasing them away, respectively.